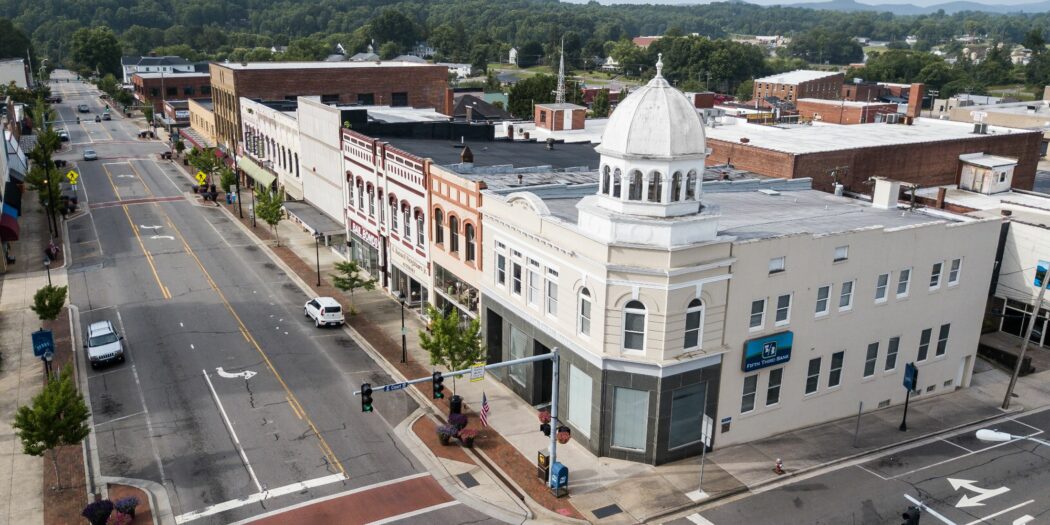 Marion improved its water infrastructure, addressed staffing needs and, most notably, secured a key piece of its downtown landscape.

Marion’s approach is two-fold: one part acting now, and one part exercising patience.

On the act-now front, Marion is making a notable investment in purchasing a key downtown building. The acquisition serves two purposes. One, the building is an iconic landmark in Marion’s downtown. “It literally is our logo,” said City Manager Bob Boyette. “The City Council wanted to preserve it.” And two, Marion’s local government operations needed more space. Prior to ARP, Marion’s choices were to either invest in renovating their current City Hall, or pay to move to a different facility. Through ARP, the City was able to easily choose the latter option, while at the same time preserving an important piece in its community.

The building previously housed a bank, which had gone out of business. Marion was able to purchase the property for a relatively cheap sum of $300,000 – a transaction that speaks directly to the relationships the city had built with its local businesses over the years. “We were not the high bidder,” Manager Boyette said. “But we shared our story and our vision, and they got behind it.”

Along with many towns across North Carolina – and the country – Marion also saw areas of need in its water and sewer systems. These included line replacement, repairs, plant repairs, inflow and infiltration study across system. “It’s important and necessary, but it’s something that wouldn’t qualify for grant money and something we didn’t want to go into debt for,” said Boyette. Marion has already expended some of its ARP funds towards those projects, and has earmarked additional funds for later identified water infrastructure needs.

On the patient side of things, Marion has reserved money to potentially invest in a few select priorities, but has not made those decision yet. Possible investments include a few staffing hires – a Grants and Project Manager to help the town both manage its current ARP allotment and to acquire additional funding; and the hiring of firefighters. The town is looking into ways to stretch its ARP funds in these categories by utilizing additional matching grants or other programs. “Once we knew we were getting ARP funds, this was identified early on,” said Manager Boyette. “We’re just waiting now to see how best we can leverage all available funding.”

If all of the planned expenditures and staffing additions are made, Marion would still be left with a significant amount to invest into street repairs. Before pursuing that option, however, they are presently waiting for the conclusion of a pavement condition assessment, underway with an engineering firm.

“ARP has allowed us to do things that we need to do, but would absolutely would not have been able to do without a burdensome tax increase,” said Boyette. “It just wouldn’t have been feasible in our community.”

Relationships with Community: Marion’s purchase of a downtown building — its iconic logo — allows for both a new City Hall and the preservation of a key building. And yet, it may not have been financially possible if not for the relationships developed with the business owners over time. Marion was not the high bidder, yet still was awarded the purchase.

Patience and Prioritization: Towards some projects, Marion has already acted. Towards others, the City is waiting to organize the most efficient and cost-effective approach. This strategy indicates a level of preparation in both understanding the city’s needs and prioritizing the most impactful possible investments.