American Rescue Plan in Action: Sylva Getting a Lot Out of a Little 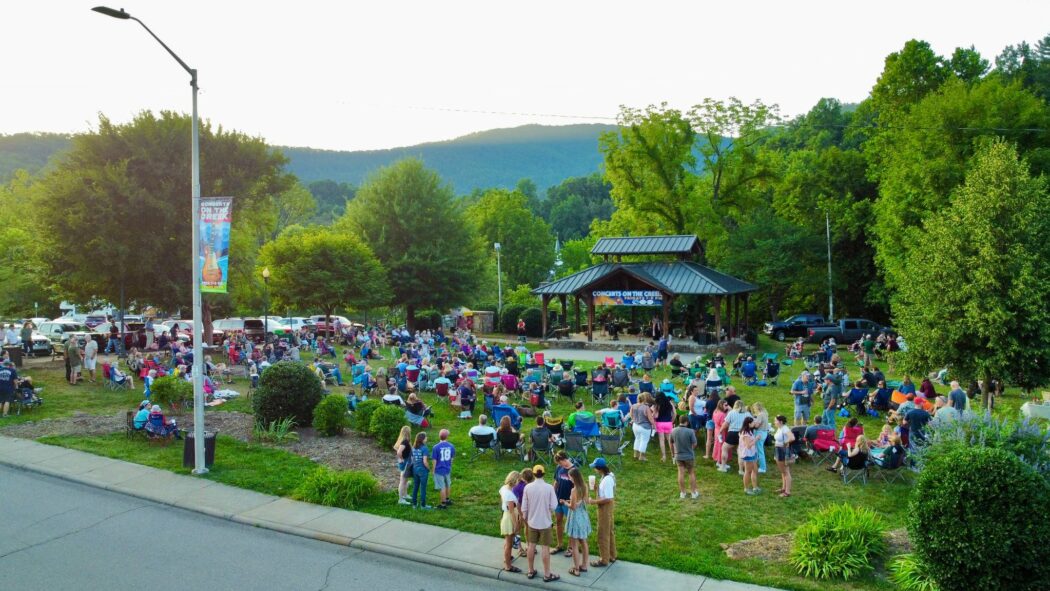 Sylva — with a shovel-ready project addressing infrastructure and a downtown asset — targets an ideal ARP investment.

Like many towns in western North Carolina, Sylva regularly plays host to far more than just its 3,000 permanent residents. As much becomes clear the moment you step foot downtown among the bustling shops, breweries, and restaurants, all nestled beneath the sight of the mountains and historic hilltop Jackson County Courthouse. For American Rescue Plan purposes, however, it’s only the full-time residents that count for funding totals, leaving Sylva with a relatively small appropriation to serve a quickly growing community.

They succeeded in that goal through a single major project: Bridge Park, one of the town’s most well-used public spaces, regularly hosting gatherings, events, weekend concerts, food trucks and more.

“It gives us another feather in our cap to attract visitors, but it’s a plus for our residents,” said Mayor Lynda Sossamon. “It makes them feel proud of our downtown.”

The project is two-fold, strategically addressing both the improvement of a community asset and the needed investment into local infrastructure.

First, in regards to the community asset, the Bridge Park project will address a largely unused gravel lot that lies adjacent to the park. Sylva bought the property in 2014. This project will renovate that area to double the parking availability, create greenspace, introduce landscaping, add a walkway, and construct a pier over Scotts Creek, which runs through downtown. It will be a total makeover of Sylva’s flagship park.

Second, and perhaps more importantly, the impacts of the renovation will go far beyond just the surface-level appearance of the park. It will also address critical stormwater concerns for downtown.

In 2016, Sylva received a grant from North Carolina’s Clean Water State Revolving Fund to study Scotts Creek. Sylva used those funds to hire an engineering firm, which evaluated the area and drew up the plans Sylva is now pursuing. The park serves as a central tool in Sylva’s stormwater approach. By building the bio-retention pond, creating greenspace and completing all other elements of the plan, Sylva isn’t just making the area more attractive – it’s also increasing its stormwater capacity to better protect downtown and the local watershed.

And because of Sylva’s years-long preparation for this plan, this project is shovel ready.

“The park is an asset to our town, but it’s really the stormwater aspect that’s going to have a long-term impact,” said Mayor Sossamon. “This helps the community.”

To fill out the rest of their ARP funding, Sylva made several investments to directly address the ongoing risks of the pandemic, included upgraded ventilation systems in all public buildings and investments into their audio-visual capabilities to allow public meetings to be streamed virtually to the public. The town also made a modest investment into a skate park to both serve the local appetite for outdoor activities and to further attract tourists.

“This is a generational chance to do something really good for our town,” said Mayor Sossamon.

Preparation: Sylva had already laid the groundwork for the Bridge Park project when they first bought the adjacent land and then later commissioned a study of Scotts Creek. With that information available and a professionally developed engineering plan on hand, they simply needed to work on acquiring the necessary funding. ARP filled that gap.

Efficiency: As a tourist community, Sylva’s local government serves many more than just its 3,000 full-time residents. Yet, it’s that 3,000 number that determines funding. Sylva stretched each dollar through the Bridge Park project, as it serves multiple uses: stormwater infrastructure, public space, and a downtown asset.