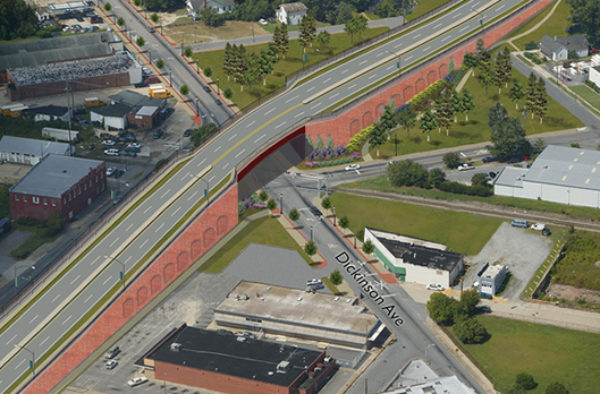 "If Greenville means business, we must work with our partners on economic development."

A transformative road project that will connect the City of Greenville’s thriving university and medical communities is nearing completion.

The 10th Street connector, soon to be renamed Leo Jenkins Boulevard, is expected to be open for public use by the end of 2018. The $46 million project, which began in September of 2015, is a 1.4-mile thoroughfare that will connect the City’s Medical District to the Uptown District and the East Carolina University millennial campus and main campus. The connector will also provide more direct access to Vidant, a regional medical center, for people traveling into the community for medical care.

While the connector is a North Carolina Department of Transportation project, the City of Greenville, Vidant, and ECU recognized its need and impact and contributed $2 million each to expedite the construction. The City is also utilizing $1.75 million from a $15.85 million transportation improvements bond to pay for upgrades on the connector such as sidewalks, streetlights, landscaping, and streetscaping.

“The connector is a good example of collaboration between the City and the North Carolina Department of Transportation and our commitment to streets that are complete with amenities such as sidewalks, bike lanes, street lights, and streetscaping,” Mayor P.J. Connelly said in his State of the City speech this past June.

In addition to connecting the medical and university areas, the 10th Street connector will provide safer and more direct access for residents of West Greenville, a designated revitalization area, to healthcare, education, and jobs. Development opportunities also exist along the new corridor, paving the way for more shopping, eating, and residential options for people who work in the medical district or live in the area.

The project’s impact on traffic cannot be overlooked as well, as it is expected to improve traffic flow in Greenville for those who work in the medical, uptown, and university employment centers.

“That is just the first of many projects on the horizon that will require such collaboration,” Mayor Connelly said. “We are also committed to $3.5 million in matching funds to assist with more than $400 million in NCDOT projects on Fire Tower Road, Evans Street, 14th Street, and Allen Road.”

“The growth we have experienced in recent years has resulted in more than 600 new jobs in the uptown area alone since 2014, and we have seen real estate transactions sky rocket from $3.7 million in 2015 to more than $25 million last year,” said the mayor. As it happens, the unemployment rate is falling, with a labor-force growth charting twice that of the state’s in the past six years.

“We are growing at a record pace,” Mayor Connelly told residents and business owners in in June. “Everywhere you turn, there is new construction for housing and infrastructure, there are new businesses popping up throughout the city, and we continue to expand our arts and entertainment options.”

He added: “If Greenville means business, we must work with our partners on economic development.”