A Public-Private Boost to Business and History in Sanford 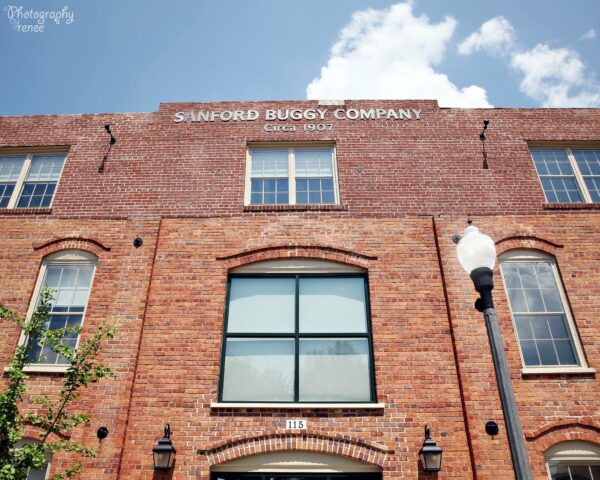 “It has become a crowning achievement for our overall revitalization project for Sanford."

It was a shoo-in for recognition.

The City of Sanford recently shared the spotlight with public and private partners in a recent project that improved downtown, preserved local history and created better interaction between local government and developers. The planning and work that went into preserving and revitalizing downtown’s venerable Sanford Buggy Company building was among the honorees at the 2017 North Carolina Main Street Conference on March 15, 2017.

“The Sanford Buggy Company is a shining example of economic development through historic preservation,” said Jennifer St. Clair, executive director of Downtown Sanford, Inc. “This project transformed a once dead (but full of potential) corner of downtown, bringing it to life with a beautiful restoration, good-sized employee base and a steady stream of foot traffic to the building.”

Progressive Contracting Company — along with project partners the City of Sanford, Lee County, Sanford Area Growth Alliance and Gerald Traub Architecture & Design — won an Award of Merit for the Best Adaptive Reuse Project at the annual conference that drew more than 500 downtown professionals, elected officials, volunteers and consultants this year. Built in 1907 when the Tyson Buggy Factory in Carthage incorporated the Sanford-owned buggy-building business, the 30,000-square-foot facility was a workhouse for the local economy until the mid 1920s, when the automobile took off in popularity.

After housing several industries for the decades that followed, the building sat empty for 15 years. But then community leaders and stakeholders had a vision for a one-stop shop for developers, making it that much easier to do business in Sanford. Progressive Contracting Company Inc. led the restoration/rehabilitation effort according to the National Parks Service Standards of Rehabilitation. Federal historic tax credits and North Carolina Mill credits were approved and granted for the $5.5 million restoration. Today, Sanford Buggy Company is home to Downtown Sanford, Inc.; City of Sanford’s planning, inspections, code enforcement and historic preservation; Lee County GIS Services, environmental health; and Sanford Area Growth Alliance.

“It has become a crowning achievement for our overall revitalization project for Sanford,” Sanford Mayor Chet Mann said. “This beautiful building is in a significant location in our downtown, and it has really forged the way for continued revitalization efforts. The tax value of  Chatham Street has now increased by 10 or 12 times its value prior to this project. Most importantly, our citizens are thrilled with the restoration of the building. It has been a part of restoring our community pride and now sees 50 or so employees and countless number of visitors each day, all doing business and spending time and money in our downtown.”

Additionally, Downtown Sanford, Inc. nominated Brian Bystry, owner of Progressive Contracting Company, as its 2016 Main Street Champion for his investment in and commitment to Downtown Sanford since 1995 when he purchased and rehabilitated the Old City Hall building. Bystry has since purchased 15 other abandoned historic properties. All but two have been completely restored to high-end commercial space in downtown Sanford — three of them historic tax credit projects and all adding over $4 million to the downtown tax base. “An entire Downtown block has been transformed into a vibrant area, bustling with activity and home to many businesses, thanks to Brian’s efforts,” read his nomination. “His passion for preserving historic buildings and optimistic attitude made him an obvious choice to be honored as a champion to Downtown Sanford.”