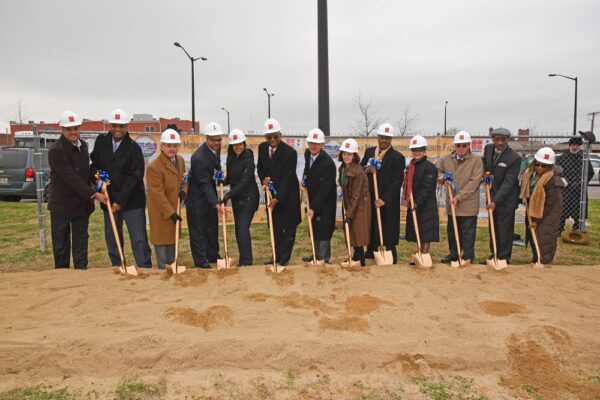 “The DCF will be a catalytic project which should create amenities for our community that will help lead to a vibrant downtown.”

The City of Rocky Mount broke ground March 13, 2017 on an economic development project expected to revitalize the area’s economy, position the city as a destination, create positive energy for the center city and for potential investors, and capitalize on sports tourism.

The need for an indoor sports and events facility and the city’s current sports tourism success sparked the conversation of what would become the Downtown Community Facility (DCF). The city decided to embark on the design-build project following development of an initial pro forma, followed by program modifications in consultation with Sports Facilities Advisory (SFA). SFA is a business management consulting firm based in Clearwater, Fla.

The building will feature 16 volleyball courts that can be converted from eight basketball courts. The DCF will also include locker rooms, a family entertainment center, climbing walls, a ropes course, meeting and banquet rooms and a medical clinic. In addition, it will have concession areas to serve its patrons. “This community and region currently have no place to host nearly 5,000 people indoors, and the DCF would provide such a location,” stated retired City Manager Charles Penny. “This facility could also host high school graduations or college graduations and hopefully eliminate the need to determine which grandparent can attend a graduation.”

Rocky Mount officials are hopeful the DCF will complement the Rocky Mount Sports Complex’s current success in sports tourism. A venue for outdoor sports, the complex in 2015 attracted 92,000 tournament visitors, generating an economic impact of over $10 million.

This economic success only further supports SFA’s research, indicating that sports tourism is a $200 billion industry in our country and has proven to be recession-resistant. Rocky Mount is well positioned to be a player in that market. In the fifth year of operations, the DCF is expected to generate 46,000 additional hotel room nights, with 300,000 visitors annually and 48 projected events. The net profit by year 10 will be $450,000, according to the pro forma. The total economic impact for the 10-year period is expected to be at $264 million.

“The DCF will be a catalytic project which should create amenities for our community that will help lead to a vibrant downtown,” said Penny. “The DCF will make our community attractive for young people to consider raising their families.” The DCF is expected to be completed spring 2018.