A Downtown Revival in Goldsboro 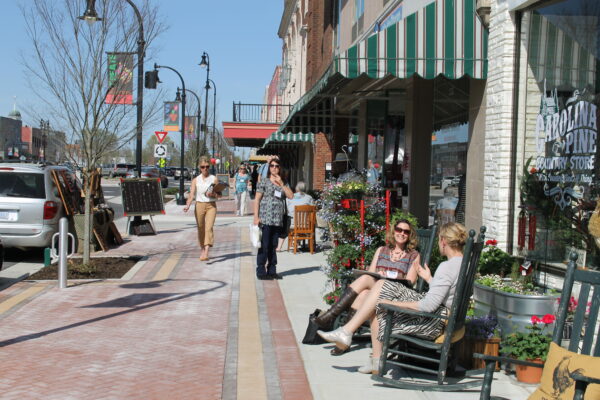 A long-term redevelopment plan pays dividends for a "Great Main Street in the Making."

It should come as no surprise that Goldsboro was selected in 2015 as a “Great Main Street in the Making” for its Streetscape Project, which has recast the main downtown retail corridor−Center Street−and redefined the downtown. On four blocks of the pedestrian-friendly street today, wide brick walkways pull patrons into shops and restaurants. Music plays on speakers attached to decorative streetlight poles; the lighting fed by underground wiring. Three roundabouts, sculptures and a fountain help to complete a picture that beckons businesses and their customers.

The success didn’t happen overnight. It began in the 1990s with the creation of a downtown and neighborhood master plan. Supporters of downtown revitalization created strong lines of communication with elected officials and sought buy-in with public meetings. By 2012, the city agreed to spend $1.4 million on the first block for reimagining and reworking the street. Goldsboro also won grants to help stabilize the nearby historic train station.

The city paid for the design of two more blocks of the project in 2013. Those investments set the stage for Goldsboro’s big coup in 2014: the winning of a $10 million federal TIGER V grant. With the city’s $2.8 million match, the Streetscape Project was extended two more blocks; the city’s Transit Center was rehabilitated; and improvements were made to Walnut Street, which connects Center Street and the train station.

The results have been impressive. Since planning for the first block in 2010, 49 new businesses opened in downtown. There have also been 23 new owner/investors in downtown commercial buildings, with rehabilitation projects either completed or underway and valued at $3.8 million−taking place in the last two years. With that momentum, the city has been able to win some additional state grants, all of which makes for a great and revitalized downtown.