A Full-Scale Revamp in Hickory 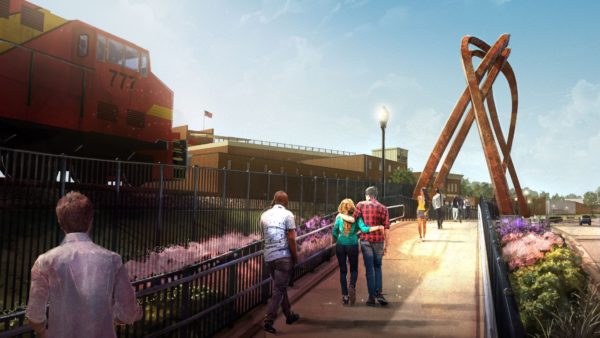 Hickory did not opt for a piecemeal redevelopment.

The prospect of standing pat was not considered either. Given that the last two decades had been a gauntlet of two recessions, 45,000 lost jobs, and a palpably harsh economic climate, the community and city leadership were in lockstep in their belief that wholesale action was necessary.

Looking around the Southeast, they found inspiration in several places – Chattanooga; Greenville, S.C.; Durham. Each had undergone a drastic revitalization. With its longtime foundation of manufacturing and textiles diminishing, Hickory needed a similar turnaround.

“We were losing jobs and losing population,” said Sarah Killian, communications specialist for the City of Hickory. “It made people start saying, ‘Hey, we need to do something to reinvigorate our city.’ We knew that something needed to be done to attract people, to attract business, to create amenities that would make top talent want to come and live here.”

They came up with “Inspiring Spaces,” a comprehensive redevelopment plan intended to improve nearly every facet of the city. It identified four catalyst projects: City Walk, a multiuse pathway running from Lenoir-Rhyne University through downtown (and includes a complete renovation of the Central Business District’s Union Square); River Walk, a greenway beginning on Lake Hickory and connecting to current and future park amenities; Streetscapes and Gateways, which marks major entrances to Hickory and updates roads to further link different areas of the city; and Trivium Corporate Center, a 270-acre high-tech business park.

The program was ultimately approved by Hickory citizens via a $40 million bond referendum in 2014. It passed with over 60 percent of the vote.

“It was all strategically designed, and things are already starting to happen,” City Manager Warren Wood said. “We feel like we’re in a really good place right now with all the projects we are rolling out.”

Additionally, Hickory launched six projects to be led by public-private partnerships, whose focuses would include the development of nearly 100 acres of parks, refurbished public spaces, and improved outdoor trails. On top of it all, there were then two city-wide infrastructure initiatives, dedicated to improving low-income housing, storm water systems, water and sewer lines, and fiber optic internet cables.

Five years removed from the referendum, Hickory has done well to build momentum for its revival. Financially, the city leveraged its bond sale to earn $50 million in additional grant money, while also securing significant funding from the U.S. and North Carolina Departments of Transportation. That backing allowed Hickory to expand its original plans—in one instance, lengthening the urban trail system from five to 10 miles—and, as such, its original estimates of $500 million in economic impact and 8,000 jobs now seem conservative.

“That’s probably half of what we’ll bring in,” Wood said. “What we really think is going to happen is even more robust than that.”

Hickory has made full use of the community’s excitement as well, bringing them into the fold with the creation of a 42-member Bond Commission. Composed of citizens and organized into subcommittees, the commission provides feedback on the bond projects and serves as a conduit to the larger community.

That engagement has created an anticipation that has jump started progress and delivered economic benefits Hickory didn’t expect to reap for years down the road. The primary example is Trivium Corporate Center, which, despite being under construction, has already secured two tenants, who will together provide hundreds of jobs and $80 million in investments.

“It’s starting to bear fruit,” Wood said. “When this is all said and done, we’ll be a model for communities looking to reinvent themselves and improve their quality of life.”

Hickory’s entire project will likely not be fully completed until 2024. The community revitalization, though, has already begun.