A Pathway to Businesses 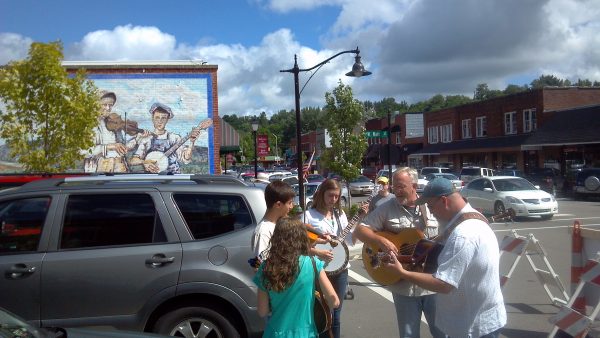 In 2013, the town of West Jefferson, in partnership with the North Carolina Department of Transportation, largely completed its Streetscape project aimed at revitalizing its downtown. The town spent $139,750 directly on the project, which involved removing traffic signals at two downtown intersections and replacing them with all-way stops, and adding curb extensions with brick pavers and landscaping. With the exception of one intersection, the project occurred inside the town’s designated historic district.

Once the project was completed, a number of formerly empty buildings were filled, and three buildings were renovated by private owners, each spending in excess of $200,000. The buildings that were renovated were the Old Hotel, built in 1917 and which is now the Hotel Tavern Restaurant; a movie theater, now known as Artist Theater; and a building that now houses a jewelry an auction house.

The impact of these changes has not been lost on existing business owners. Josh Williams, co-owner and retail manager of the Ashe County Cheese Co., has seen how much the change has encouraged more tourism and additional pedestrian traffic in downtown. “Being a small business in a small town, the money is just not there to be able to do some of this work that’s being done,” he said. “The city has brought it our way and it’s really benefited us. Any time the town grows and people come in, it helps our business and it helps every business in town.” He also understands who his retail customers are. “They’re looking for something to do, something a little bit different,” Williams said. Now, in West Jefferson, it is a lot easier for them to find that “something different” right in the middle of town.