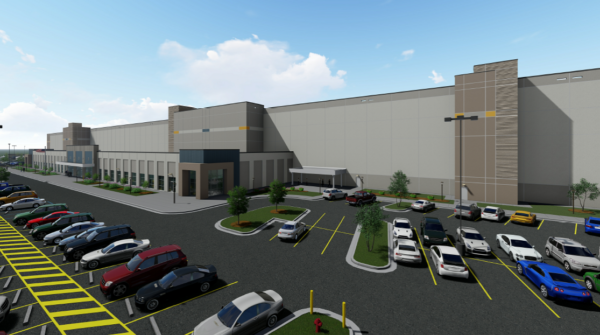 "Today will be remembered as the day that Garner entered a new era of prosperity and opportunity."

Town of Garner officials are hailing Amazon’s selection of the Garner Technology Center as the location for a new 2.6-million-square-foot, state-of-the-art distribution center.

The Seattle-based e-commerce company will invest approximately $200 million in the site on Jones Sausage Road, formerly the location of the ConAgra plant where a deadly explosion occurred in June 2009. The investment will create an estimated 1,500 jobs, making the distribution center Garner’s largest employer.

Amazon hopes to open the center by fall 2019. The e-retailer’s investment in Garner will be approximately four times the amount of peak investment by ConAgra at the site, while the number of employees at the facility will be several hundred more than peak employment at the ConAgra plant.

“This is a historic day for Garner. Today will be remembered as the day that Garner entered a new era of prosperity and opportunity,” Mayor Ronnie Williams said at the Aug. 10 news conference announcing the e-retailer’s decision. “Amazon’s selection of this site is an important milestone for our town as we continue to move forward after the ConAgra tragedy.”

Town Manager Rodney Dickerson noted that the new investment at the site will help the Town move closer toward a 50-50 balance of commercial and residential tax base.

“As a result of this major new investment in our community, our citizens will have to shoulder less of the tax burden in the years ahead,” Dickerson said. “I commend the work of the Town Council and staff in enhancing the Town’s long-term fiscal stability.”

The Town Council on July 2 unanimously approved a special-use permit request by Dallas-based Hillwood Development Company to develop nearly 88 acres of the approximately 98-acre tract with a four-story building that will have a footprint of 680,000 square feet. The nonprofit Garner Economic Development Corporation (GEDC)—established after ConAgra donated the site to the Town to take ownership of the property and oversee its redevelopment—closed on the sale of 88 acres of the property to Hillwood on Aug. 8.

“This project meets the goals the GEDC set out to accomplish,” GEDC board chair Bruce Andrews said. “Sale of the property will allow us to continue to be an instrumental force in Garner’s future economic development efforts.”

Hillwood will partner with the Town and NCDOT to make critical road improvements along Jones Sausage Road and also the Jones Sausage/Garner Road intersection. This will benefit all motorists who traverse that area. The Town’s portion of the cost of this road project will be relatively modest—approximately $600,000 of the overall estimated price tag of $5.1 million. NCDOT, subject to the availability of funds, is willing to commit up to $4.5 million in economic development funds toward proposed road improvements along Jones Sausage Road.

It is expected that the distribution center will add approximately $45 million annually in new payroll in Garner.

“Today marks an exciting moment for the Town of Garner, Wake County and the Research Triangle region,” said Michael Haley, executive director of Wake County Economic Development. “This announcement is a great example of how a company can move into a town and have an immediate positive impact on the community by creating jobs, building the talent pipeline and investing in residents.”

The project involves the successful repurposing of a brownfields site that had been dormant since the explosion at the former ConAgra plant.

“This is a major success story for the state’s brownfields program. We’re proud of the work we’ve done with our partners with the state to land this project at this site,” Stallings said.

The state defines a brownfields site as an abandoned, idled or underused property where the threat of environmental contamination has hindered its redevelopment. Under the North Carolina Brownfields Program, prospective developers negotiate a brownfields agreement with the program that defines activities needed to make the site suitable for reuse, rather than cleaning up the site to regulatory standards (which responsible parties are required to do). The developer is eligible for a property tax incentive lasting five years.

“Amazon is obviously a stable, fast-growing company, and they will be in this community for the long haul,” Stallings said. “We are thrilled to welcome the company to our community, and we know they will be a great addition to Garner.”