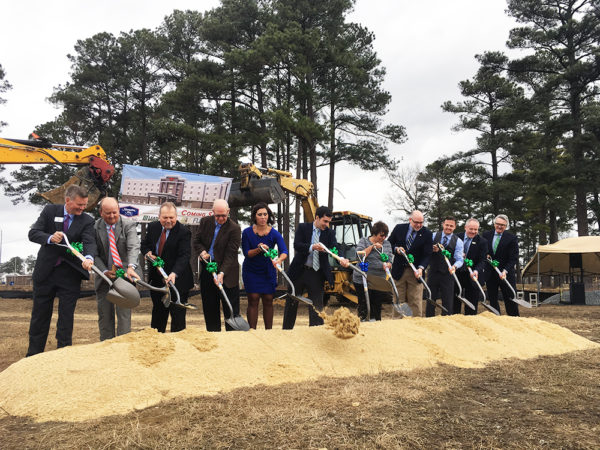 The latest groundbreaking in Benson is a standout example of local government and private partners teaming to bring the community a transformative economic development success.

The Leath Company on Jan. 26 officially broke ground on a $9.2 million hotel project expected to influence new development all around it. Slated for completion in late fall 2017, the Hampton Inn will include 89 guest rooms and a conference space. The Leath Company will additionally prepare two additional outparcel (pad ready) sites designated for restaurant use.

“This is obviously the domino Benson needed to fall for its next phase of growth and development,” the Dunn Daily Record quoted of Benson Town Manager Matt Zapp. “We’re very enthused to be partnered with Leath Company…. This is the tipping point for us.”

The same paper has quoted Leath Company officials as saying the receptiveness and cooperation on part of the town’s government was a big part of the private group’s decision to build in Benson.

The new Hampton Inn will be a pet-friendly facility positioned right off of Interstates 40 and 95 to make overnight guests of Northeast- and Florida-bound travelers – leaving a lot of money with the local economy.

Ahead of the project, the town secured the help of ElectriCities on a hotel feasibility study. The town also put in place a local hotel recruitment incentive and worked to replace an old sewer pump station to ready the site.

The town additionally is developing an off-leash dog park right next to the hotel land — a boost for the community, but also to make the hotel all the more attractive to travelers. Entire websites are dedicated to helping travelers find pet-friendly stops and lodging and, needless to say, it appealed greatly to the private developers.

Mayor Will Massengill was among more than 70 local supporters, players and partners on hand for the hotel’s groundbreaking. “We are definitely a community on the grow,” he said.