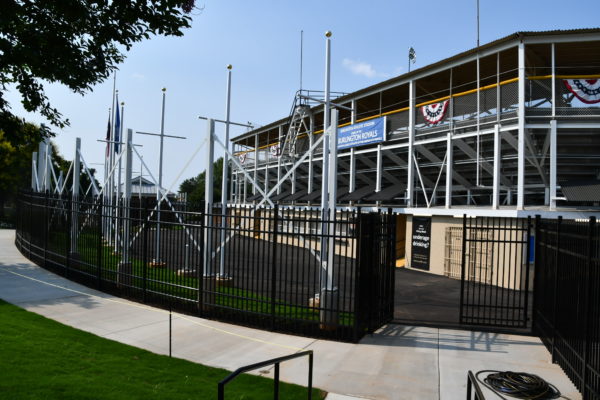 "The City’s continued investment in the facility ensures that it remains a centerpiece of our future.”

The City of Burlington is bringing its baseball history into the present.

The Burlington Athletic Stadium has completed a $1.2 million renovation project ahead of the 2019 season. The improvements, which were funded by the city and designed by CPL: Architecture, aim to modernize the 60-year-old ballpark, home of the Appalachian League’s Burlington Royals. Upgrades include brand new restrooms, a new entryway plaza and an expanded concourse, a new, four-window ticket office, a new souvenir shop, and improved parking facilities.

The stadium touts a storied history. Purchased from Danville, Virginia, the park was disassembled, transported to Burlington and reassembled at its current location in 1959. In the time since, it has developed into a community landmark.

“The Burlington Athletic Stadium improvements are a social and economic investment in our community,” said Burlington City Manager Hardin Watkins. “The stadium is an important piece of Burlington’s history, and the City’s continued investment in the facility ensures that it remains a centerpiece of our future.”

Motivated by Burlington’s sizable contributions, the Royals’ General Manager Mikie Morrison pledged to improve fans’ in-game experience as well, saying, “We realized that if the City was going to put this much money into the facility, then we needed to up what we could as well.” The Royals modernized their concessions by introducing a food truck, Bingo’s Diamond Diner, and improving the quality of their food sourcing.

Burlington has long committed to maintaining the stadium, investing each year into updates and maintenance. This most recent renovation project was launched in 2018, and is sure to improve the fan experience.