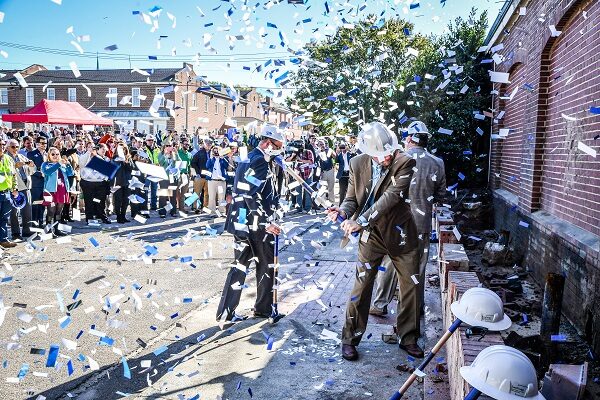 “For every dollar we invest in our downtown we expect to triple it with private investment dollars.”

Hundreds of Kannapolis officials, business people and residents celebrated the kickoff of the Downtown Revitalization Project during a ceremony Thursday morning. The event was held at the former K-Town Furniture Building which will be the site of the Sports and Entertainment Venue.

Kannapolis City Manager Mike Legg began the ceremony by outlining the three key components of the Downtown Revitalization Project: the streetscape and infrastructure improvements, the mixed use demonstration development, Vida; and the Sports and Entertainment Venue. “We are embarking on a journey which will bring new investments, new businesses and new opportunities for a better quality of life for our citizens,” commented Legg.

“For every dollar we invest in our downtown we expect to triple it with private investment dollars.”

Kannapolis Mayor Darrell Hinnant praised his fellow city council members, Dianne Berry, Ryan Dayvault, Roger Haas, Darrell Jackson, Tom Kincaid, and Doug Wilson, for all of the hard work and collaboration they have accomplished on decisions regarding the Downtown Revitalization Project. “We took the bold step of purchasing our downtown two years ago and began envisioning a unique future for our residents. Each step has been carefully researched and thoroughly planned by each council member and it is an exciting day to see it all begin,”

He quoted John Maxwell, ‘A great leader’s courage to fulfill his vision comes from passion, not position,’ and that is what we have here in Kannapolis. Leaders, working together, to make the vision of our citizens a reality.”

As confetti rained down, Kannapolis City Council members concluded the ceremony by using sledgehammers to knock down a portion of the K-Town building.

The first phase of the streetscape and infrastructure improvements is now underway and includes:

• Removal of overhead power lines and installation of new underground electrical ductwork from Vance Street to Laureate Way and Main Street to Oak Street/Chestnut Avenue.
• Demolition of the former K-Town Furniture Building which is the future site of the sports and entertainment venue.
• Measures to protect trees on West Avenue as well as the removal of certain trees which have aged and are unhealthy.
• Construction fencing.
• Restriping of various streets and parking lots which will not be part of the construction zone in order to maximize parking availability during the construction phase.

Phase Two is the actual construction of all streetscape and infrastructure improvements and it will begin in January 2018. The entire project should be completed in early 2019.

Once completed the streetscape will be a dynamic urban park that includes unique green space, outdoor dining and social activity areas. Vida, the mixed use Demonstration Project, by the Lansing Melbourne Group, should begin construction in early 2018 and the Sports and Entertainment Venue construction will begin in summer 2018.