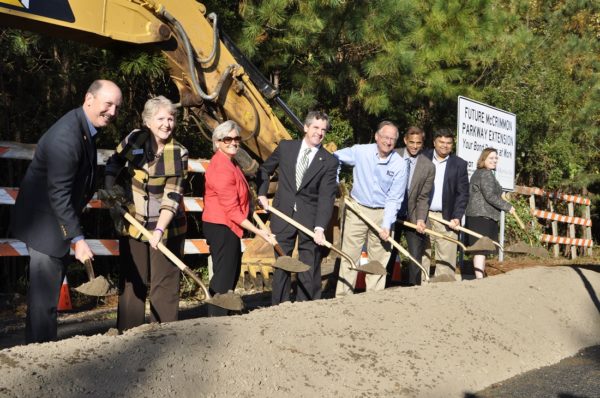 "A thriving, progressive place where people, businesses and opportunities are truly connected."

With a population of 25,000 and a geographical footprint of just eight square miles, Morrisville is much smaller than its neighbors Raleigh, Cary and Durham. Even with its small size, the town serves as the U.S. headquarters for many global companies, such as Lenovo, and will be welcoming a new Wake Tech Community College campus in 2017.

Rapid growth has pushed several roads in town to capacity. To help curb the congestion, voters approved $14.3 million in street improvement bonds in November 2012. Since then, the town has successfully collaborated with the North Carolina Department of Transportation (NCDOT), North Carolina Railroad, Norfolk Southern and other partners to leverage resources and develop a plan to connect key sections of a major thoroughfare, the McCrimmon Parkway Extension, and provide drivers with a way to bypass one of the most frequently congested intersections in town.

•Widen McCrimmon Parkway across the railroad tracks near NC 54 to add a left-turn lane and right-turn lane onto NC 54, re-striping the existing eastbound lane to a through lane

Mayor Stohlman says the Morrisville Town Council, staff and partner agencies are focused on acting quickly. “This is by far the biggest project the town has ever done, and we are very proud to have gone from voter approval to breaking ground in less than four years,” he said. “For a project of this scale, it is essentially warp speed to already be building.”

In addition to improving traffic, the projects will open up about 400 acres of land for commercial development over the next three years – and provide the main point of access to the planned Wake Competition Center.

Other Infrastructure
Rapid growth and the associated increase in congestion have lead Morrisville to expand non-vehicle mobility options as well. The town continually invests in bicycle and pedestrian infrastructure with a goal of allowing residents to move seamlessly and safely between neighborhoods and activity centers.

Similarly, to road improvements, the town has collaborated with NCDOT and Wake County government on sidewalk projects to improve pedestrian and bicycle mobility. Working with County and State partners, the town has gained more than $100 million in additional funding to address transportation needs, improving mobility and reducing congestion throughout town.

Among the notable projects is an East-West greenway connector. The Crabtree-Hatcher Greenway will run between the towns’ flagship recreation area, Morrisville Community Park, and Wake County’s Lake Crabtree Park. It will also connect with the Town of Cary’s Black Creek Greenway which provides access to both the County Park and Umstead State Park.

The strategy ties to the Town of Morrisville’s recently unveiled brand message, Live Connected. Live Well., “The new mark and tagline really reflect who we are – a thriving, progressive place where people, businesses and opportunities are truly connected, a small-town atmosphere in the heart of the Triangle,” said Town Manager Martha Paige

For Morrisville, living connected is not just about roads, greenways and partnerships, it is also about technology. A website redesign is planned for 2017, which will include moving forward with an open data initiative to address a growing need for mobile accessibility.

By the time the road projects are complete, more than $22 million in improvements will be made to Morrisville’s infrastructure. The technology connections are expected to be complete in late 2017. More details on both of these, and all things Morrisville are available at TownOfMorrisville.org/news. The latest Morrisville business news is also available from the Morrisville Chamber of Commerce at MorrisvilleChamber.org.