Elkin Goes ‘All In’ 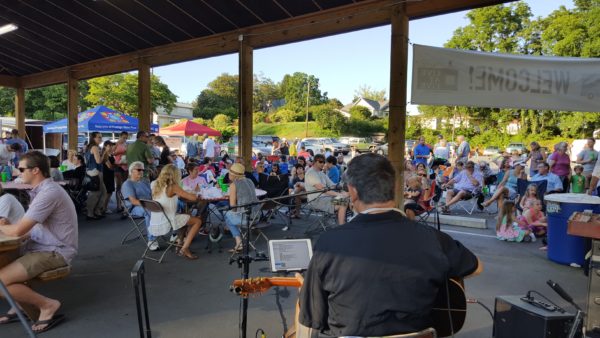 The 'Explore Elkin' initiative has revitalized the energy of this small town.

Like many former mill towns in rural North Carolina, stagnant development seemed to plague the town of Elkin. In 2017 there were 17 empty storefronts in downtown Elkin, the population continued to stay around 4,000 residents, and the future seemed bleak.

Big cities seemed more desirable for business and opportunity and without a significant change, Elkin was sure to suffer.

But change soon came in the form of “Explore Elkin,” an initiative designed to boost community engagement and, ultimately, revive Elkin’s Downtown. Headed by community leader Jeff Eidson, Explore Elkin asked residents to invest in their own town. For $100 per couple, one could become an Explorer, while $200 could make you an Elkin Explorer Leader. This program successfully raised funds that allowed Explore Elkin to sponsor and create town events, improve marketing, promote the town, and boost tourism and community involvement.

The biggest test for this plan came in March 2017 at the Explore Elkin launch at the renovated Liberty event venue downtown. Local leaders were not yet certain that the community fully supported the project.

“We had people show up and say, ‘I only came because I didn’t think anyone else would come, and I know you’ve been working hard on this,'” said Eidson. “When 300 people showed up that night, it made it easy to be enthusiastic.”

The size of the crowd that night grew to standing room only. Eidson told the room, “We have to throw our chips in. We have to get involved and get engaged to develop a shared vision, and then take the steps necessary to realize that vision. Now ask yourself, are you all in?”

A local doctor by the name of Skip Whitman pledged to match any donations made that night up to $10,000. Eidson reported that they raised a total of $28,000.  By branching out and asking for support from residents instead of only traditional sponsors such as local businesses, a wider net was cast so that anyone directly affected by the town’s success could play a vital part in its improvement.

A crucial aspect to the success of that night, Eidson suggests, is the act of highlighting successes of the town. After all, a vital part of someone’s identity is where they live, and Elkin has much to be proud of. The school system is ranked in the top five in the state, and the area contains countless trails created by hundreds of volunteers. The town sits on the beautiful Yadkin River and is home to a National Park Service Trail, N.C. State Paddle Trail and trails that connect Elkin to Stone Mountain State Park. Elkin is also home to many vineyards and wineries as it is centrally located in the Yadkin Valley wine region.

“I think people were starving for an optimistic message and something they could believe in,” said Eidson.

With the use of $55,000 raised by the group in the previous two years, Explore Elkin has marketed a weekly email outlining all the different town events. “I got tired of learning on Tuesday morning about something that happened on Friday night that I wish I’d gone to,” Eidson remarked.

Explore Elkin has sponsored performances in the restored historic Reeves Theater, advertised others in state magazines, and created many of its own activities, such as monthly Food Truck Fridays and live music events. Explore Elkin is also to thank for the annual NC Trail Days Festival, held the first weekend in June, which celebrates the town’s many hiking, biking, and paddling trails. The co-owner of The Reeves, Debbie Carson, said “They do a lot of things that bring people downtown and indirectly help downtown businesses and help us.”

It’s most important addition, however, has been the boost in morale, according to Elkin Economic Development Department Leslie Schlender.

“[The events] get everyone excited,” said Schlender. “‘Wow we live in this great place! We have a river right in our backyard, and this fun community with people who are willing to get out and enjoy it. That positive morale creates positive involvement, not negative, unproductive finger-pointing.’ As much as the money is used for events, there’s this community side of being an Explorer because people see how great it is to live here.”

Just a mere two years later, the number of vacant properties downtown has greatly diminished and properties downtown seem to be a hot commodity. The Explore Elkin aptly named “Chaos Coordinator” Natalie Eidson says, “Around town people are far more positive than they were before. I think people are interested in opening businesses and storefronts. You’re seeing new businesses come in and renovations happen. They just seem more excited than they were before Explore Elkin.”

Explore Elkin has helped revitalize the energy in this small town and given people more to look forward to. This “all-in” approach shows that people care about this unique place and are dedicated to its success, both economically and in improving the quality of life.

A resident who runs her business in one of the historic buildings in Downtown Elkin, Crystal Morphis, says “I think about that phrase a lot when I’m asked to do things in this community. Sometimes I’m asked to volunteer for a committee or help with an event, and I ask myself, ‘Am I all in? Am I really all in? Yeah, I’m all in.’”