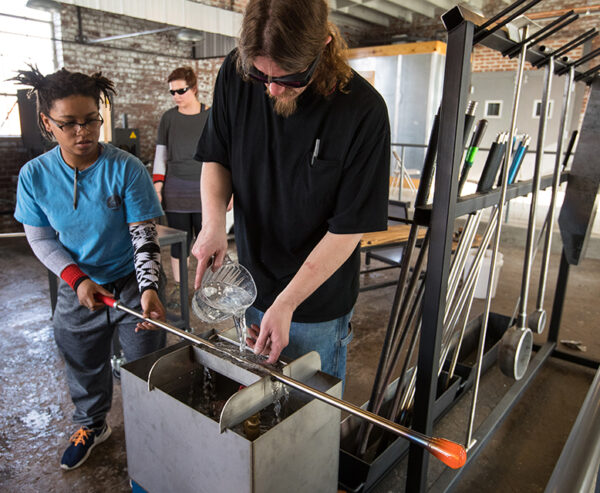 “We want to make Farmville the arts and cultural capital of eastern North Carolina.”

“We want to make Farmville the arts and cultural capital of eastern North Carolina,” explained Town of Farmville Manager David Hodgkins. Through a creative partnership with East Carolina University’s School of Art and Design, that vision is becoming a reality. Located just 20 minutes west of East Carolina University, Farmville is now home to the “Glass Station,” the university’s first art studio that specializes in the art of hand-blown glass.

As its name suggests, Farmville is a town traditionally known for its farming community, specifically its tobacco and sweet potato farms, many of which have evolved into innovative leaders in the industry. Through public-private partnerships, Farmville is working to apply that same innovative spirit to its downtown arts and culture scene. The Town of Farmville has worked with a grassroots, volunteer economic development nonprofit called The Farmville Group to bring an economic boost to the area. The idea is to continue to honor the town’s rich farming history, but plan for its future where Farmville serves as a destination for folks looking to experience the arts.

Several years ago, the partners approached East Carolina University about partnering to extend the university’s well-known arts program into the town in some way. The Glass Station is a product of many pieces of the puzzle coming together in just the right way: ECU was toying with opening a glass studio, when The Farmville Group pitched the idea of partnering on an arts-related project; Farmville’s Allen and Stowe families donated the former Eason Gulf gas station to the DeVisconti Trust in a serendipitous deal that provided a location for The Farmville Group to suggest; ECU followed-through in creating the arts program in Farmville’s downtown district. These, along with many other details, fell into place allowing the project to take shape.

The joint effort has paid off with the Glass Station’s opening and the addition of a new ECU course that draws a crowd – both the students who want to learn the ropes of making hand-blown art pieces and the everyday folks who are drawn into town to watch the students hone their craft.

The school also has plans to expand the curriculum to include other mediums at the Glass Station, including metals and clay.