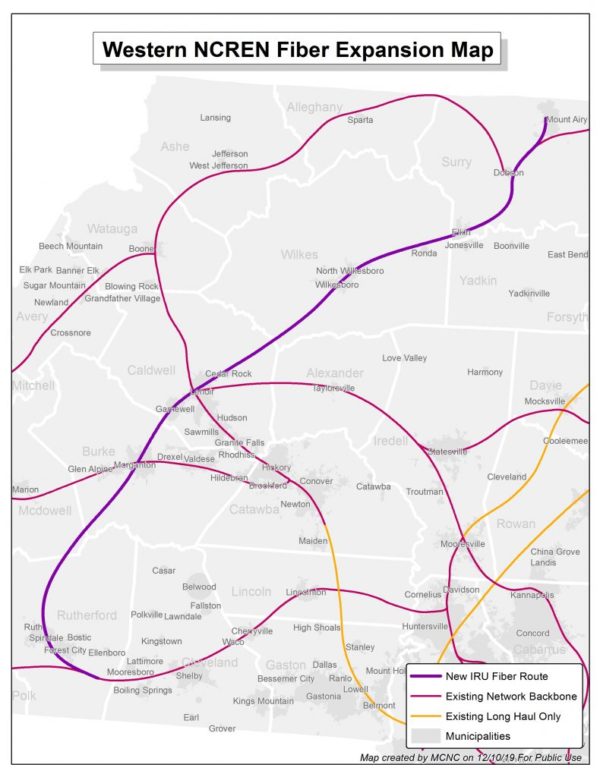 A new investment underway in western North Carolina could be a critical element in solving the rural broadband crisis. And it’s an investment that would have never been made if not for the work of Forest City and Rutherford County.

In Forest City and the surrounding region, Facebook is partnering with MCNC, a technology non-profit that owns and operates the state-wide fiber-based North Carolina Research and Education Network, to build approximately 100 miles of fiber to make high-speed internet available to key community institutions: schools, medical facilities, and government offices. Facebook is investing in the area because since 2012, that is where their data center is located.

In 2010, Facebook was looking for a home for one of its four data centers. The facility would be an immense, 350,000-square-foot building housing tens of thousands of servers, according to the News & Observer. A campus of that size requires a great deal of infrastructural support–roads, water, electric–and Facebook needed a host city that would be able to provide these services in large capacity.

Enter Rutherford County and Forest City, who had been making those necessary investments for years.

After a textile mill exited the area, the county was left with a desirable property, which was located near a four-lane highway and had water and electric capacity, and the town was left with excess utility capacity. They partnered to acquire the property and transform it into an industrial park.

Forest City provided the utilities, and Rutherford County upgraded the water and sewer systems. They also worked closely with Duke Energy, who ultimately built a substation on the property, to provide the site with redundant power. Around 2010, after extensive marketing efforts from all parties, a company began to express interest. It was Facebook.

“You have to lay all that groundwork early on to attract a company like Facebook to the area and to get that kind of investment,” said  Condrey. “That’s certainly played a role in the continued investments they’ve made ever since.”

Those investments have more than paid off. For the town and county, Condrey estimates that Facebook has invested nearly $1 billion since breaking ground in 2012, and Forest City itself has been awarded a number of grants that largely offset their upfront expenses. And, of course, the company employs a good percentage of the town.