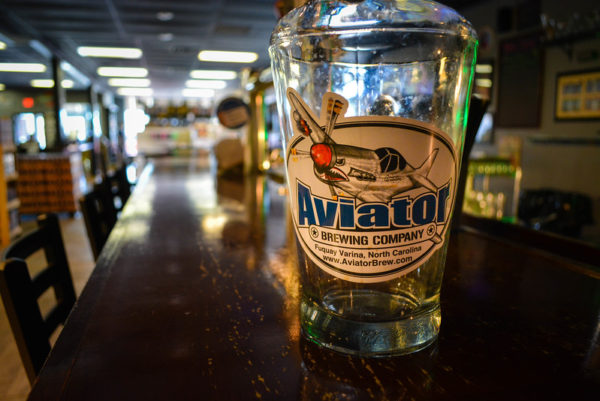 “This project once again demonstrates the growth opportunities Fuquay-Varina can offer industry leaders who are positioning themselves for long-term success.”

One of Fuquay-Varina’s most notable destinations and employers is expanding its Fuquay-Varina manufacturing and distribution operations, bringing 75 new full and part time jobs to the community.

Aviator Brewing Company, a leader in the craft brewing manufacturing and distribution industry, is proposing a $4.065 million manufacturing, commercial and distribution facility expansion project. This expansion will result in the creation of 75 new jobs over the next five years. The project broke ground last week and will be complete by spring 2019.

Aviator Brewery currently operates in a 22,000-square-foot warehouse at 209 Technology Park Lane in Fuquay-Varina. The expansion project includes relocating the company’s manufacturing and distribution operations to their recently purchased downtown warehouse formally known as the Gold Leaf Tobacco warehouse. The new 109,000-square-foot facility will be located about one block from the company’s current restaurant, retail and tap house locations in the Varina District in downtown. The expansion also includes the purchase of new machinery and equipment. Aviator has plans to convert their current manufacturing space into a facility to manage their growing catering event business.

“I am excited that Aviator Brewing Company, one of the nation’s leaders in craft brewing manufacturing will expand its operations in Fuquay-Varina,” stated Mayor John W. Byrne. “I appreciate the commitment by Aviator Brewing Company. The Town of Fuquay-Varina is tremendously proud of Aviator and looks forward to supporting this industry leader in achieving continued success.”

“I would like to thank the Fuquay-Varina Town Board for believing in the long-term success we have planned for Aviator Brewing Company,” said Mark Doble, CEO of the Aviator Brewing Company. “We started our business in an airplane hangar nearly 10 years ago and now we have grown to become one of the top craft breweries in the U.S. I appreciate the support and partnership of the Town and look forward to working with the Town on all our future endeavors.”

Aviator Brewing Company, founded in 2008 by Doble, is headquartered in Fuquay-Varina and has been brewing since 2008 when the company began making beer inside an old airplane hangar. Today the company has 125 employees and does nearly $4 million in sales. Aviator also exports to South Korea, Taiwan, Brazil, Germany and several other countries.

“This significant expansion by Aviator Brewing Company demonstrates the importance of Fuquay-Varina’s support for our existing businesses,” said Town Manager Adam Mitchell. “Continuing to support and strengthen the partnership with one of the community’s most dedicated businesses is part of the Town’s overall economic development model.”

The expansion will be supported, in part, by incentive funding approved by the Town Board of Commissioners. Under the terms of the company’s incentive agreement, Aviator Brewing Company is eligible to receive up to $203,250 of economic development funding assistance. Town funds will be paid to the company after all of the project’s capital expenditures have been completed.

In November 2015, the Town Board adopted its first incentive policy focused on recruiting new and supporting existing manufacturing companies that expand the Town’s tax base and creates new employment opportunities. In November 2016, the Town awarded its first economic development incentive to Bob Barker Company to support the company’s expansion of their Fuquay-Varina manufacturing and distribution facility.

In addition to its manufacturing operations, Aviator has played a strategic role in the revitalization of Fuquay-Varina’s downtown. Within a block radius the company operates the Aviator Tap House, Aviator Smoke House, Aviator Bottle Shop and soon will open a brick oven pizza shop. Last year, Doble was awarded the U.S. Small Business Administration’s 2017 Exporter of the Year for North Carolina and the Southeast. The SBA’s Southeast Region includes Alabama, Florida, Georgia, Kentucky, Mississippi, South Carolina, Tennessee and North Carolina.

“Aviator is a destination not only for downtown Fuquay-Varina but for the entire Triangle region and state,” said Jim Seymour, the Town’s Economic Development Director, whose department oversees downtown development projects. “This project once again demonstrates the growth opportunities Fuquay-Varina can offer industry leaders who are positioning themselves for long-term success.”