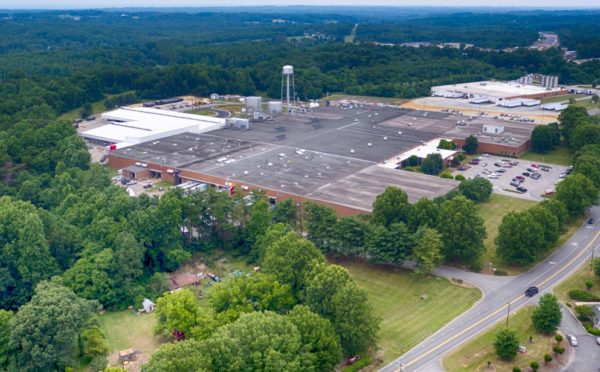 Some 20 years ago the City of Reidsville began investing heavily in its water and sewer infrastructure by increasing rates to bring about much needed utility improvements, a process that continues to this day. That decision would play a major role in Unifi not only keeping its dye plant in Reidsville but also expanding its operations in 2016. This innovative company partnered with the City of Reidsville, Rockingham County and state officials to make the expansion happen. In September 2016, Unifi celebrated the official opening of its REPREVE Bottle Processing Center, a $28 million investment that brought nearly 90 jobs to the local community. Unifi takes recycled materials, such as plastic water bottles, and incorporates these materials into a variety of auto, outdoor, home and apparel products. More than 4 billion plastic water bottles have been recycled into REPREVE products, which can be found in some of the world’s favorite brands like Levi’s, Haggar, Ford and The North Face.

The City of Reidsville received an $861,000 Community Development Block Grant from the N.C. Department of Commerce to replace an aged sewer line and support the expansion of the Unifi facility. Companies like Unifi depend on municipalities to build a strong water and sewer infrastructure so that they can create high quality products. The plant expansion also qualified for a $500,000 Building Reuse Grant from the N.C. Rural Infrastructure Authority, part of the Rural Economic Development Division at the Department of Commerce. Furthermore, the city, county and state recognized the importance of the infrastructure improvements the city began making some two decades ago and continued over the years as Reidsville Mayor Jay Donecker and then-Gov. Pat McCrory credited the impact made on the UNIFI REPREVE project in this video.