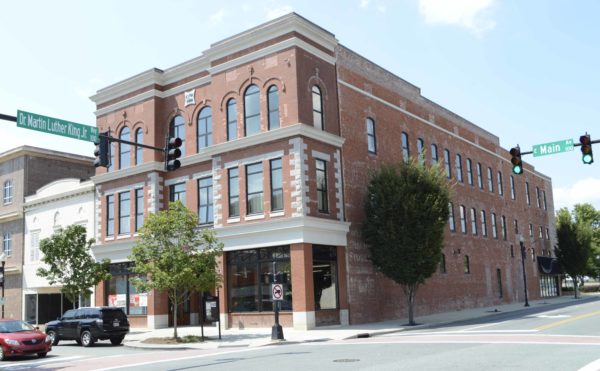 Great things are happening in Gastonia.

In June, The Loving Group, one of the largest and fastest growing landscaping firms in the country, moved administrative offices from Charlotte to a new location: the 132-year-old former Craig & Wilson building in downtown Gastonia. Loft apartments by the Carriage Company occupy the upstairs of the historic building located at 100 W. Main Ave.

The Carriage Company and the City of Gastonia partnered in 2008 for redevelopment of the building utilizing funding from the U.S. Department of Housing and Urban Development’s Neighborhood Stabilization Program. In 2017, The Loving Group purchased the ground floor of the building from the City of Gastonia, officially moved administrative offices this summer, and plans for expansion with the recent purchase of an adjacent building.

The redevelopment of the former Craig & Wilson building is just one of many success stories in Gastonia. Statistics from the U.S. Census Bureau show the city’s population has grown from 47,218 in 1980 to 76,593 in 2017, an increase of more than 62 percent.

From the Carriage Company Lofts and The Loving Group offices in this highly visible location downtown, you can walk to the Gastonia Conference Center, and a variety of unique, locally owned restaurants including Webb Custom Kitchen, recently named one of the country’s most romantic restaurants by Open Table, an online restaurant reservation service with reviews. There’s also the award-winning Cavendish Brewing Co. a few blocks away, hair salons and art studios, and a boutique hotel under construction in the historic Lawyers Building nearby.
Green spaces abound. Across the street from the Lawyers Building is Center City Park with Ghillie Dhu – a kinetic metal sculpture, a popular spot for lunch-time visits or just lounging. Next to the park, the Merit Building’s outside wall features five large panels for changing art displays. If it’s a Friday night in the summertime you can hear live music from free concerts at the nearby outdoor Rotary Pavilion. You can walk or ride your bike to the Catawba/Avon Creeks Greenway or Carolina Thread Trail.

About one mile away is the recently renovated historic Loray Mill, another mix of residential and commercial/retail space. The 114-year-old, 600,000-square-foot building offers loft apartments and Growler’s USA Gastonia, a restaurant and craft beer pub, among other businesses. The building is considered one of the state’s most important historic properties.
To increase connectivity between the Loray Mill and downtown, the City of Gastonia has launched the Franklin Urban Sports & Entertainment (FUSE) project. This is a revitalization initiative with plans for a year-round, multi-function sports and entertainment complex for events such as baseball, soccer and concerts. Nearby private investments, like the redevelopment of Trenton Mill, are expected to include office and retail spaces and high-end apartments.

• Capacity growth at the Gastonia Technology Park that required a new City of Gastonia electric substation to support the growing number of businesses there. Plans are to expand the tech park to adjacent property.

• A booming retail market with one of the largest shopping areas in the Charlotte region and construction underway for a new shopping center.

• The Charlotte Area Transit System (CATS) is studying the feasibility of offering light rail from Charlotte into Gaston County.