In Laurinburg, Christmas Saved the City 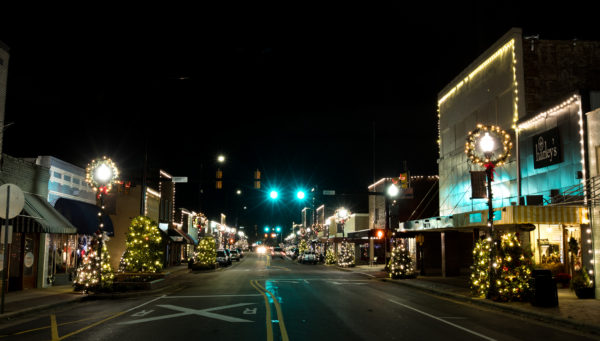 Through strong local leadership, city officials set the stage for a holiday celebration that has revived a community.

The mountain of misfortune had been growing in Laurinburg for nearly two decades. Three major industrial companies had left town in the early 2000s, taking with them 2,500 jobs. Economic hardship followed, from which recovery has been steady but slow.

Yet, buried beneath those toils and the years of downtown decay, was an immense resource: hometown pride.

Thanks to a Christmas parade—or, more accurately, a month-long downtown holiday makeover called ‘Tis the Season—that civic dignity has finally been unearthed. And the resulting turnaround has been nothing short of remarkable.

“Downtown was on its last breath,” said Terry Parker, one of the organizers of ‘Tis the Season. “People now believe that Downtown Laurinburg can be reinvented. There is hope. There is excitement, about what is going on. They are proud.”

The volunteer-led festivities, which are in their second year, turn Laurinburg each December into the picturesque setting of a Hallmark movie. Nearly 100 trees line the streets. Two hundred wreaths decorate a downtown brick wall. Every single storefront is decorated, including the vacant ones, as music plays, lights shine, and attractions, which include recitals and ice skating, bring the community together all month long. It’s a wholesale holiday celebration that has received awards and statewide acclaim.

It has also been the catalyst for a rediscovered community spirit that has whisked away that long-accumulating gloom to reveal both a robust network of public leadership and an enlivened community. Combined, those two elements are quickly revitalizing Laurinburg.

“The ball is rolling down the hill,” said City Manager Charles Nichols.

In the city offices, Nichols and Community Development Director Michael Mandeville laid the foundation for this renaissance years ago. It began with the city’s involvement in the Downtown Associate Communities program (offered by the N.C. Main Street and Rural Planning Center) and then rolled into the Main Street program, which provided Laurinburg with a roadmap for downtown recovery.

Scotland County began to take an interest in the area’s revival as well, especially after the area absorbed yet another critical setback when a central, three-story building collapsed due to damage inflicted from Hurricane Florence. The hole in downtown still remains.

“That building falling down was like a lightbulb to my board,” said Mark Ward, Director of the Scotland County Economic Development Corporation, a non-profit created by the county for large industrial recruitment. “They said, ‘We need to take an active interest in this.’ Companies and employees are not going to want to stay here if we don’t have a vibrant downtown.”

From there, the two parties proceeded piecemeal, buying and renovating several dilapidated buildings and transforming a derelict property into a pleasant walk-through area in a central part of downtown. They also made infrastructure improvements along the way, and most recently, began developing a large, rundown property into a multi-use greenspace.

“By this time next year, people are not going to believe the change in downtown,” said Parker

Most important, however, was the partnership itself. Working together, investments had been made and connections formed, allowing the two public bodies to quickly and effectively support efforts that would boost the area. The stage was set for citizen involvement. ‘Tis the Season took the cue.

It all started at a community meeting, which on one particular night led to reminiscing about how downtown had changed for the worse. Parker remembers posing the question, “So, what are you going to do about it?”

They came up with a Christmas parade, and the idea caught fire. In January 2018, discussions began, and the group soon developed a full-scale strategic plan. The city supported it every step of the way, supporting them financially and guiding them legally and administratively.

“We couldn’t ask for better city leadership to work with,” said Parker. “What we did took a lot of extra work from city employees. But they supported this idea from the very beginning. Everybody backed us.”

The response was astounding. For the city of 15,000, Parker estimates that they had more than 600 volunteers work around 8,000 total hours last year. The streets filled with community members peering in the storefronts. People cried. And when this 2019 holiday season rolled around, even more people got involved.

“It wasn’t us—it was the community,” said Parker. “They were ready. We were just the spark.”

The town has been re-energized. The thousands of lost jobs have not been fully replaced, but the local economic model has, changing from one of reliance on a few massive companies to one of progress through many smaller, homegrown businesses—what Ward calls a “grassroots” approach.

And with community involvement at an all-time high, that growth should only continue.

“I don’t think it’s ever going to stop,” said Mandeville.