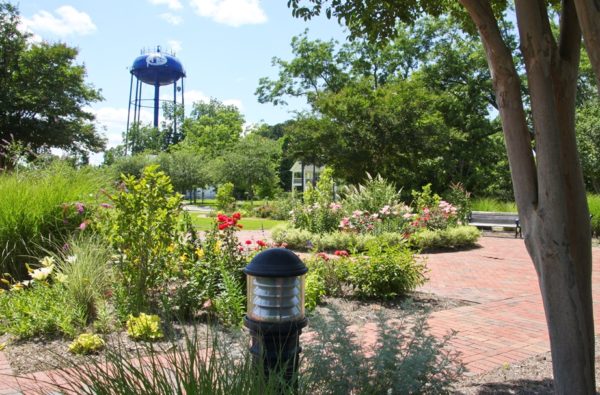 Jacksonville is prepared for new opportunities.

Boomtown is both one of the few downtown two-story stores and a descriptor of how Jacksonville exploded after the 1940 announcement that Marine Corps Base Camp Lejeune would be built here.

Christmas Parades and troops marched in front of Boomtown Furniture Store, and in front of empty buildings made less attractive to businesses as shopping centers and a mall drew shopping away from downtown. The City of Jacksonville has now worked with many partners to create an excitement about living downtown and about doing business downtown.

Community Development funds have helped to build new homes downtown where a landscaped and well-kept park serves as a draw. The City’s Clean & Green initiative has also beautified and protected the environment.

New enhancements to the streetscape are being evaluated and a $3.4 million Sturgeon City Environmental and Education Center will tell the story of how Jacksonville restored the previously degraded New River.

Fueled by a collaborative Downtown Study Group of City and County leaders, Onslow County has invested in a $20 million Consolidated Human Services building, a $16 million Courthouse expansion project and invested heavily in Jacksonville Landing which now attracts boaters and fishermen to the river. City enhancements to a NCDOT bridge set a design standard for welcoming residents and visitors to the downtown.

Well served by Jacksonville Transit, parking is still a concern. The City and the County have partnered on several ventures and have reserved space for a future parking deck. One of those spaces is near the City’s $23 million Center for Public Safety, combining fire and police services.

The City-County partnership is also evaluating the future of waterfront land for potential development or recreational use. A similar partnership with the Onslow Council for the Arts has created the opportunities for murals to help tell the story of the community.

Jacksonville’s is now ready for new residents and opportunities.