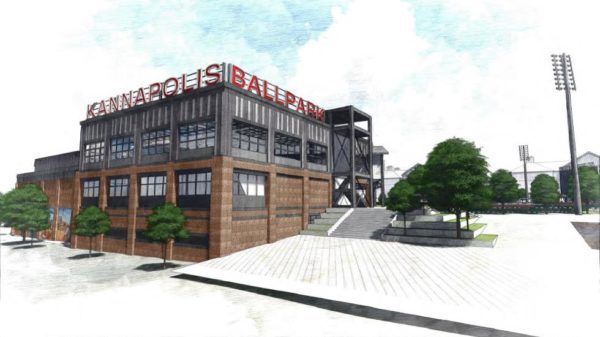 A design for the Kannapolis Sports and Entertainment Venue has been unanimously approved by the Kannapolis City Council. The venue will be the home of the Kannapolis Intimidators and serve as an anchor for the redevelopment of downtown Kannapolis. The next step in the process is the completion of architectural drawings.

The venue will be located downtown on the site of the former K-Town Furniture. Market studies have shown a sports and entertainment venue would be a game changer with this facility and could bring an average of $26 million in private development investments to the immediate adjacent area. The entire Downtown Revitalization Project is expected to bring over $370 million in private investment to Kannapolis once the revitalization project is completed.

The $37 million venue will be designed to have an intimate atmosphere for small and large groups with numerous seating options to enjoy baseball, concerts, festivals, and many other events. The venue is envisioned as another piece of the city’s Discover a Healthy Life brand by functioning as a public park. The concourse will be 360 degrees and open to citizens who want to walk or run every day.

The design features industrial architectural elements which will complement the current structures and the new streetscape on West Avenue. Existing West Avenue buildings will be an integral part of the venue with uses such as restaurants and shops. The plan calls for the sports and entertainment venue to be a key architectural feature of downtown especially as one travels in to the downtown core from N.C. 3 to Laureate Way.

Expected attendance capacity for the facility is 5,800 with eight suites. The facility will have 8,500 square feet of meeting and banquet space which will be available for special event leasing.

The facility design will appeal to many while taking advantage of the unique downtown location and includes various dining options, seating arrangements, technology, event space, and children’s spaces which will create more options for entertainment and social experiences.

The city intends to have the facility open for the start of the 2020 baseball season.

Populous designed the facility and has also completed design work for 48 minor league ballparks across the U.S. including Columbia, S.C.; Pensacola Fla.; El Paso, Texas and Fort Wayne, Ind. Populous designs can also be seen in the arena, aviation, collegiate, convention center, and major league baseball markets, most recently through new ballparks for the Atlanta Braves and the Miami Marlins.