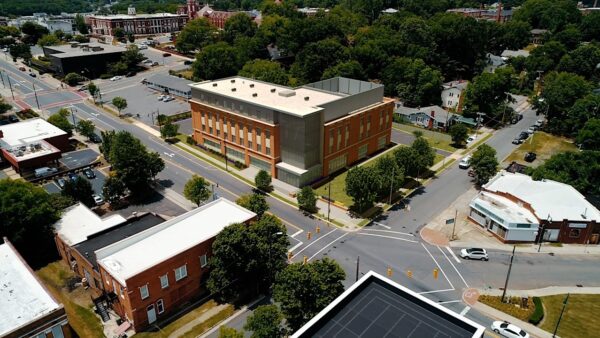 Albemarle is on a streak. After a number of job creation and investment announcements, linked directly to city government’s forward approach to economic development, comes news of a $16 million health science building Pfeiffer University is placing downtown. Partners have already held the groundbreaking, and earthmoving is just ahead.

The local newspaper calls the development of the four-story building “One of the most anticipated groundbreakings in the history of the city” and adds that the “economic impact and potential to revitalize and remake downtown Albemarle will be much more valuable” than the initial investment figure. The 10-year projection is $136 million; Mayor Ronnie Michael is quoted in news coverage as saying the “Pfeiffer Effect” will mean more business, life and all-around vibrancy in the downtown core.

A further benefit will be the brainpower cultivated there. The graduate-level programming at health science facility gives loads of potential to Albemarle’s future. While the university could have developed the building in any number of places, Pfeiffer President Colleen Perry is on record citing the school’s relationship with the city and what the addition means to the local economy and employment picture.

Behind the scenes, city government has gone to great lengths to boost its downtown business invite. For one, City Manager Michael Ferris recommended and oversaw the making of a downtown streetscape master plan, which came with diligent staff hours and public input. The checkboxes also included infrastructural stability, aesthetics and developing downtown Albemarle’s sense of place. “It was my goal as city manager that no one would ever come downtown and say no one cares and it is not worth my investment,” Ferris said. “We did all this to show that investment will be supported because we do our part and you can be profitable and flourish downtown.”

That’s the culture of Albemarle’s leadership. As Mayor Michael said in 2017 when the city purchased a site for an attractive corporate center, “If we’re not willing to invest in ourselves, no one else will.”

According to WBTV, which covered the groundbreaking, completion is expected in May 2020.