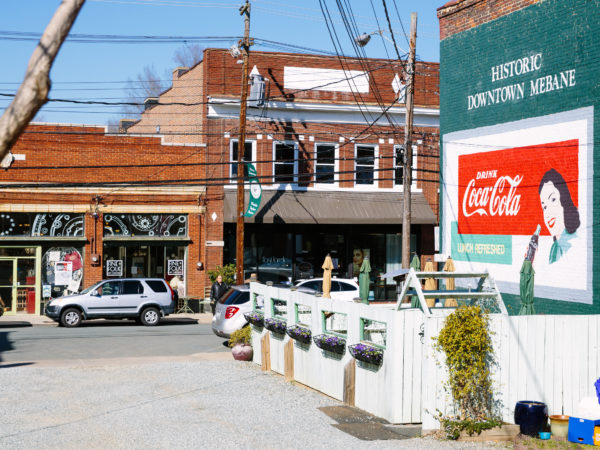 Mebane proves that you don't have to choose between industrial growth and quality of life.

The first impression of Mebane, for many, is the industrial centers on the outskirts, around the highways.

But drive into town and there’s a far different picture—that of a walkable, connected community featuring more miles of sidewalks than streets.

It’s both a striking contrast and an enviable situation. The mayor and council members, thoughtful of city assets and the ways in which to leverage them, have kept Mebane growing, while local investment has created the required circumstances for that growth. Those two engines of governance have produced a well-designed balance, where the robust industrial-commercial base and pleasant city center do not compete. Rather, the two scenes complement each other.

“When I think of a name for Mebane’s story, it is ‘Partnerships, Projects, and Positively Charming,’” said City Manager David Cheek.

The industrial economy, representing the first two of those ‘P’s, is supported by the three industrial parks: the N.C. Industrial Center (NCIC), the N.C. Commerce Park, and the Buckhorn Economic Development Zone. That core, developed over the course of two decades, has exploded in recent years, and continues to attract large-scale business relocations and expansions. Most recently, the Buckhorn Zone landed the ABB expansion and Medline, which together will create close to 700 jobs.

Yet this current atmosphere, which secures new developments with apparent ease, was anything but inherited. It began with a failure.

“The story, I think, starts with Mercedes-Benz,” said Cheek.

Roughly 20 years ago, Mercedes-Benz was looking to expand to North Carolina. Mebane, a fraction of the size it is today, saw an opportunity and jumped into the running for the company’s new manufacturing plant. The proposed site was Ray’s Dairy Farm, whose owner, Mac Ray, was looking to repurpose his property as a way to leave a legacy gift for his children. The infrastructure, though, was not in place. Water lines, roads, sewer—all still needed developing.

With those amenities absent, Mercedes-Benz ultimately chose another location, leaving Mebane to look to the future. What was seemingly a letdown became the beginnings of a new, long-term plan.

“The vision began with that experience,” said Cheek. “The Mercedes project planted a seed and an idea of what we could do with economic development.”

Thus, the city and community kept their sights on the property. The first party to act came from the private sector—the Samet Corporation—with whom Mebane quickly formed a partnership. An industrial park master plan was put into place that would develop the 900-acre dairy farm land into an industrial park, and the N.C. Industrial Center was created.

Mebane, keeping those lessons in mind, was then prepared for a later economic development opportunity involving a Walmart distribution center. The city again found itself in the running, and again found itself dealing with undeveloped property near the interstate highways. This time, however, the city was proactive in seeking partnerships. Mebane worked with Alamance County, the City of Graham, the State of North Carolina, the N.C. Department of Transportation, and the Golden LEAF Foundation to establish a plan that would develop the area, share all subsequent revenue, and create the NCCP. With the partnerships in place, they won the initial Walmart expansion. Many additional victories have followed.

All three parks now host dozens of businesses. Since 2010, Mebane has attracted 17 new companies and six expansions, which has together created nearly 3,000 jobs and brought private investment totaling $684 million. Without the investments into infrastructure, those numbers would be closer to zero. Additionally, through the increase in tax revenue, the incentives offered by Mebane are on track to repay themselves.

Perhaps most important to local leaders, however, has been what success on the outskirts has allowed for the rest of Downtown Mebane, which they have dubbed “Positively Charming.”

“You come into downtown, you see beautiful areas,” said Cheek. “You see sidewalks, people walking around. You see the town and then trees. The success we’ve had with economic development is allowing us to stay ahead of the game and make our city a more inviting place to live, work and play.”

Like the economic strategy, Mebane’s approach to its citizens and to the downtown has been directed by long-term visions. Plans for recreation, bike and pedestrian transportation, utilities, and land use, among others, guide decision making and budgets each year. And now, with its rapidly strengthening job market, a new focus has been required for housing and residential quality of life.

In particular, the city believes it can reverse a trend that has developed in which people who live in Mebane commute to work elsewhere, and people that live elsewhere commute to work in Mebane. If that situation resolves, then not only will the city and its downtown flourish from the additional activity, but the increased stability and value of the workforce will benefit the industrial side of things as well.

Growth projections for Mebane back this belief. The city, currently at a population of just over 15,000, is expected to have more than 30,000 residents by 2035.

“We have the best of both worlds,” said Assistant City Manager Chris Rollins. “You can get more bang for your buck here, on a house, in taxes, and just in quality of life. It’s attractive to people looking for a new place to call home.”

However Mebane chooses to proceed, if their past performance is any indication of what is to come, then the city is certain to continue prospering well into the future.