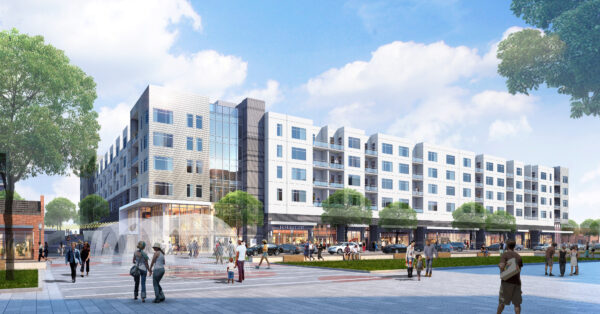 “Today, another new chapter in our City’s history begins with this significant investment. This is not just about money; this project is about people."

Officials from the City of Kannapolis and the Lansing Melbourne Group (LMG) have broken ground on a mixed-use district which will bring apartments, a hotel, restaurants, a brewery, and retail space to downtown Kannapolis.

The project, known as VIDA, will be constructed between Main Street and West Avenue on two blocks of property including the location of the former State Employees Credit Union. The four-acre site will incorporate and preserve the historic Cabarrus Bank Building as the lobby for the 125-room hotel that will break ground in the fourth quarter of this year.

Formerly referred to as the Demonstration Project, this public private partnership between the City and LMG will serve as a stimulus for additional private investment in the downtown core. LMG will invest $61 million to construct 286 apartments, 18,000 square feet of new retail and renovate 36,000 square feet of historic retail space, plus the new hotel. The City’s investment will include a 400-space public parking deck. The project will open in Spring 2021.

“Today, another new chapter in our City’s history begins with this significant investment. This is not just about money; this project is about people. VIDA, which means life, will bring people and businesses with vibrancy and excitement to our downtown. We are looking forward to all of the good things the future now holds for our downtown”, commented Kannapolis Mayor Darrell Hinnant.

“We applaud the courage and foresight of the leadership here in Kannapolis, along with the citizens of Kannapolis for lending their support in this visionary endeavor. It’s a one of a kind opportunity to create a place for the whole City to enjoy,” said Peter Flotz, a managing partner with LMG.

Additionally, VIDA is one of the first opportunity zone projects in the United States. Downtown Kannapolis was designated as a federal Opportunity Zone last year after the Kannapolis City Council voted to apply for the process. This designation provides tax benefits to private investors who invest in properties and areas which need to be revitalized.

This groundbreaking marks the third phase of the Kannapolis Downtown Revitalization Project. The first phase, the streetscape and infrastructure are scheduled to be completed later this year and the second phase, the Sports and Entertainment Venue will open in April 2020, in time for the Kannapolis Intimidators baseball season.

For more information on the Kannapolis Downtown Revitalization Project and VIDA visit www.kannapolisnc.gov/revitalization and www.vidakannapolis.com.