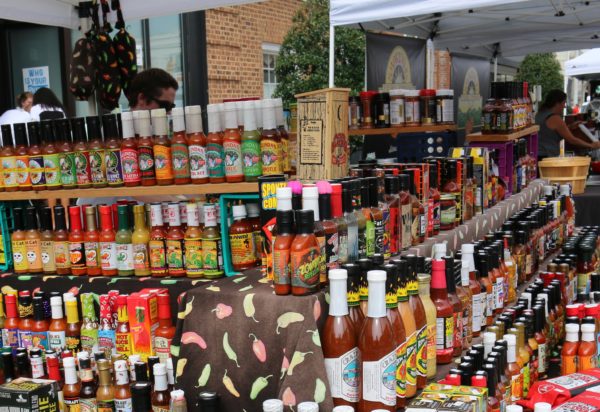 The "small town" off I-85 is becoming one of the hottest destinations in North Carolina.

The 13th annual Hot Sauce Festival took place in Oxford on September 14th. The festival brings in thousands of people, with 2019 topping over 13,000 visitors. It’s a great way for people to explore downtown Oxford, while interacting with friends, downtown merchants, fans, artisans and vendors. Each year the festival grows and the one’s in charge work hard to adapt to the ever changing community by adding craft & vendors, artisans, local breweries, and area food-trucks, bringing in rich flavors and a bit more history.

Downtown Economic Development Corporation (DOEDC), along with the City of Oxford, stress the importance of the “Hot Sauce Contest” as a crucial economic driver to downtown Oxford’s current and future economy. DOEDC, which is a 501(c) (3) organization, focuses on downtown revitalization and enhancement while working to preserve Oxford’s historical charm with new flower plantings, new benches, and new trash receptacles.

The annual Hot Sauce Festival is only one small part to the new master plan, aiming to put Oxford on the road map for future developmental and economic growth. With the hopes of becoming a regional destination, being a walkable community, and having a historic and vibrant downtown including various shops, restaurants, housing, and entertainment, the City of Oxford and the DOEDC have started implementing plans to brighten up the community.

Another fruit born from these plans is Oxford’s very own brewery. Tobacco Wood Brewing Company, which is a female, veteran owned business, opened in 2018 and has since become a community staple for its family friendly atmosphere, great barbecue, and over 34 beers! They contribute to the community by introducing a run club, book club, trivia nights, bike club, and live music!

While the City of Oxford still has a ways to go, the strides being taken by the local government, its partners, and local community shows great determination and perseverance. This can be seen by the latest project of bringing the Orpheum theatre back to life, which is located in the heart of Oxford. With our friendly neighborhood attitude and irresistible southern charm, stay tuned for that small town off of I-85, just 30 minutes north of the Raleigh – Durham area, to become one of the hottest destinations in North Carolina!