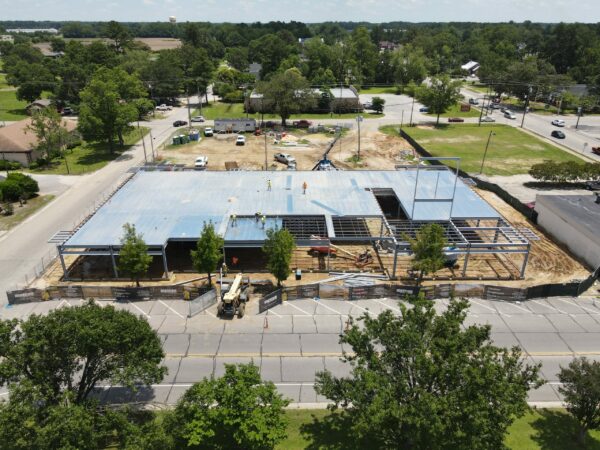 On top of expanded infrastructure and thanks to strategic partnerships, Pembroke begins to see growth.

The development in Pembroke may seem sudden. Looking across town, there are several construction projects underway: new apartments, mixed-use facilities, expansions to the local university. Yet, this period of growth, like all growth, sprouted from well-laid groundwork, courtesy of the town and its local leaders.

The projects are significant. There are four total: one from the local university, UNC-Pembroke; a multi-family, upscale apartment complex; a downtown mixed-use development called the A.S. Thomas Center; and another mixed-use development to address the growing need for student housing. In all four instances, the town played a key part.

“We’re playing an active role in these developments,” said Pembroke Town Manager Tyler Thomas. “With both the developers and the university, we make sure we’re working together collectively, so that we can lay the groundwork to meet our goals.”

It was the result of strategy. Pembroke’s town council has long understood the value of UNC-Pembroke as a local economic engine, and made it a local priority to support its growth. That meant utility improvements to ensure that the university had adequate water and wastewater systems, not just for its present footprint, but for one that allowed the institution to seek further development unimpeded. If the University could grow, then the town would grow right alongside it. That’s exactly what has happened.

Pembroke invested heavily into those utility upgrades, and leveraged Golden Leaf grants to meet the financial need. With that infrastructure in place, UNC-Pembroke had the foundation in place to garner investments, donations and state appropriations that ultimately led to the construction of a new, $38 million building for the business school.

Through this project, UNC-Pembroke now adds capacity to a rapidly growing business school, which has seen its MBA class almost double since 2016, growing from 800 to 1,400. And, though Thomas is quick to highlight that the university deserves full credit for the development, the town is strengthened all the same.

“Ultimately, the close working relationship of the town and the university and each entity’s willingness to put forth the appropriate resources in each situation is important,” said Manager Thomas.

Another element of Pembroke’s growth strategy was its ability to partner with the private sector. With limited funds, Pembroke invested time, working closely with developers to not only market the town as an ideal location for development, but then also to ensure that the preparation and permitting processes were easy and seamless. The work paid dividends. Investors saved time and money, and Pembroke earned projects that will have a major effect on local economic development.

Pembroke also earned the investment of local benefactor Jim Thomas. A Pembroke native, Thomas first supported the burgeoning entrepreneurship scene in Pembroke in 2005 when he sponsored the Thomas Entrepreneurship Center. He’s now playing a key part in the development of the business school.

“It’s a continuation of the entrepreneur center,” said Jim Thomas. “If you can create a great business school that will draw people to Pembroke, those people may end up creating a business in Pembroke.”

Jim Thomas, while working to grow the assets of the town, also recognizes some economic realities. Specifically, despite the growing school, too many dollars were spent elsewhere for Pembroke to develop economically. With the A.S. Thomas Center, as well as other projects he’s taken part in, Thomas hopes to give students and residents something to do.

“What you are seeing is millions of dollars going to neighboring towns for entertainment, shopping, and so on,” Thomas said. “It’d be terrific if those dollars could be retained in Pembroke.”

Thomas is beginning to see that situation improve. He credits the work of Manager Thomas and the town council and staff.

“They are vital,” Jim Thomas said. “They are very much dedicated to economic development and moving the town forward—making it more attractive for residents.”