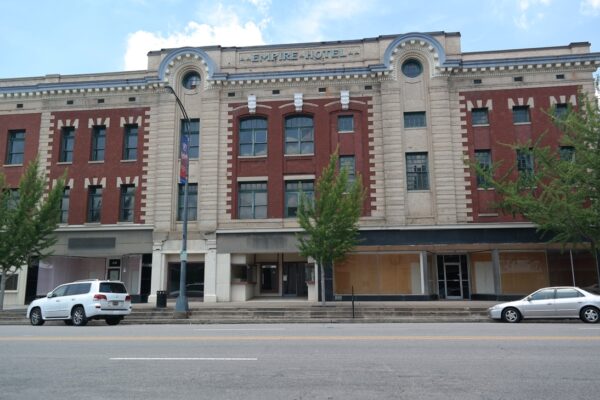 Downtown Salisbury, Inc. (DSI) recently signed a real estate contract that may provide for the long-awaited redevelopment of the historic Empire Hotel on South Main Street. Historic Preservation Partners Holdings, LLC (HPPH), renowned in North Carolina for its renovation of the Loray Mill in Gastonia, has signed a purchase and sale agreement with plans to develop the property into market-rate apartments. The City of Salisbury will consider entering into a preliminary development agreement with HPPH. Initial plans for the Empire Hotel will feature retail storefronts along South Main Street, including the retail space in the former Montgomery Ward main floor, mezzanine and basement. Combined, the project will allow for approximately 29,000 square feet of retail space.

The Empire Hotel was built in 1855 by local attorney Nathaniel Boyden, opening to the public three years later as a “first class hotel” on the heels of the railroad’s arrival in Salisbury. Then known as the Boyden House, the property also housed permanent residents throughout its 100-year operating history. After years of substantial renovations and management turnover, the hotel finally closed its doors in 1963. DSI purchased the hotel in 2007 from the Ragsdale family of Jamestown, N.C., with the intention of stabilizing and developing the property. The Empire Hotel project is contingent upon the positive outcome of several factors such as a market feasibility study, financial feasibility analysis, planning review and community input. HPPH is proceeding with an expectation that the sale agreement will close in August 2017, with groundbreaking to begin in 2018.

In 2010, Downtown Salisbury, Inc., through a series of public meetings, discussions, and with much public input, published the Downtown Master Plan. The redevelopment of the Empire Hotel would complement one of the strategies outlined in the plan — the expansion of the downtown as a diverse, livable, urban residential district. A successful Empire Hotel revitalization also reflects the vision of the recently completed Annual Goal Setting Retreat for the City of Salisbury, where supporting the creation of additional downtown residential units was deemed a priority.