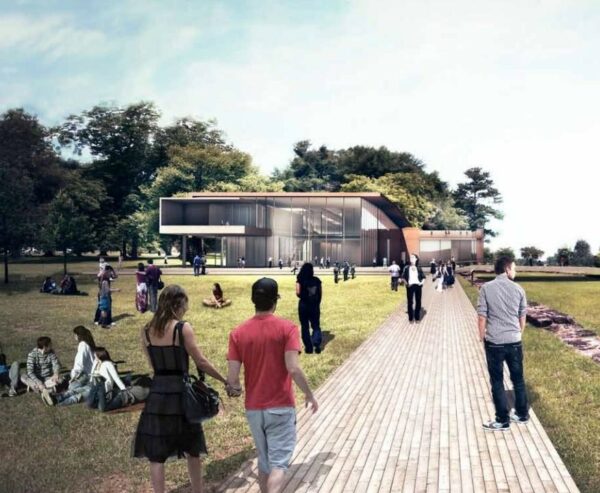 The project has made Person Street the first extensive green street in North Carolina and will serve as a model for other streetscapes in the state.

Fayetteville’s Person Street Streetscape is a first of its kind street project in the state transforming Person Street into a corridor that will help attract new investors and businesses to the eastern side of downtown Fayetteville. Dubbed an “innovative stormwater greenscape,” the streetscape covers two blocks of Person Street from the roundabout at Cool Spring Street to the bridge over the creek.

The project has made Person Street the first extensive green street in North Carolina and will serve as a model for other streetscapes in the state. With the new, fresh streetscape, complete with beautiful trees, additional parking and a pavement designed to allow rainwater to soak in, the Person Street Streetscape shows that Fayetteville is a progressive community and a choice location for new development.

The N.C. Civil War History Center will be a State-owned center for Civil War buffs that would create 200 permanent jobs and generate revenue of $20 million annually. Combined with the Airborne & Special Operations Museum and the Cape Fear Botanical Garden, and its proximity to the N.C. Veterans Park, the Civil War History Center will make this attraction a destination location, and an economic generator on a national scale.

Located on the Haymount side of Arsenal Park, where a Confederate arsenal once stood, the center will replace the aging Museum of the Cape Fear. Private money already contributed to the project from residents thus far in the fund-raising campaign totals $5 million. The City of Fayetteville and Cumberland County have both committed to contributing $7.5 million each for the project. The local group of fundraising residents and the City and County plan to ask the State for approximately $30 million for the History Center. If the request from the state is approved, which allows this effort to move forward, this will be yet another project that will lure tourists and economic development to Fayetteville.