Tobacco Warehouse To Whirl Into New Life in Wilson 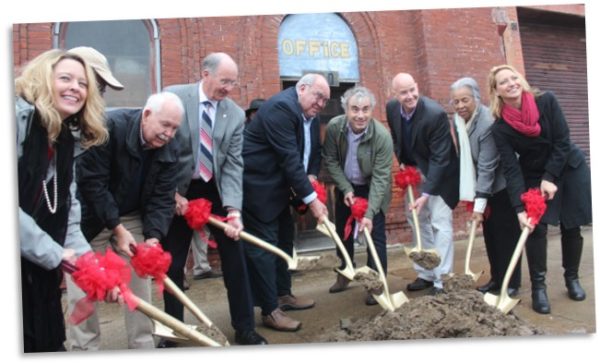 Work is underway in Wilson to convert a brick tobacco warehouse into apartments, commercial development and a visitor’s center for a massive art project. Waukeshaw Development of Petersburg, Va., broke ground in December 2016 to convert the former Hi-Dollar Warehouse, one of two remaining historic brick tobacco warehouses in Historic Downtown Wilson, into Whirligig Station, which will include 90 market-rate loft apartments, space for offices and a restaurant when it opens by early 2018. The $12 million project will also include a visitors’ center for the Vollis Simpson Whirligig Park, which is under construction across Goldsboro Street and is scheduled to open in November 2017. “The progressive plans for the Whirligig Park project, in particular, and the surrounding Innovation Zone, which is currently being developed, were the deciding factors that really convinced us to invest,” said Dave McCormack of Waukeshaw Development. “I think Historic Downtown Wilson has massive potential to be a great destination and a great place to live. I’m thrilled to be part of that process, and to work with the City and Wilson Downtown Properties, to bring new life to this iconic building.”

Wilson City Manager Grant Goings said, “The City has been steadfast in our commitment to redevelop our downtown, and to have such an experienced developer commit to a project of this scale is a true testament to the future of Historic Downtown Wilson. This project will be a great catalyst for future investment, much like the American Tobacco project was for Durham.” The renovation will expand the existing square footage of the 64,000-square-foot building to more than 85,000 square feet. The warehouse opened in 1896, but was damaged by fire in 1900 and rebuilt as a brick warehouse. The main façade fronting Goldsboro Street and the Whirligig Park site features a series of dramatic brick arches and a large arched wagon door. The building is a pivotal structure in the Wilson Central Business/Tobacco Warehouse National Register Historic District. The project will be financed with a combination of Federal Tax Credits, N.C. Mill Credits, local incentives, and traditional bank financing.

Whirligig Station is the largest redevelopment project in Wilson’s history, which has seen two loft projects completed in recent years downtown. Historic Downtown Wilson has attracted investment, especially with the construction of the Simpson park. Once complete, the 2-acre park will feature 31 of Vollis Simpson’s whirligigs along with a walking trail, a central lawn for outdoor performances, benches, picnic tables and more. For more information, visit www.wilsonwhirligigpark.org.