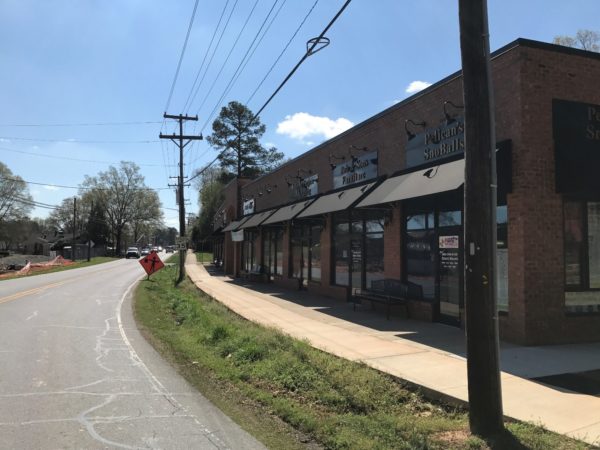 The heart of Waxhaw continues to grow.

Downtown Waxhaw is the heart of the Waxhaw community and the most significant cultural resource in the area. It has thrived throughout the years by its ability to evolve. It started as a mill town, then reinvented itself as a destination for antiques, and is now becoming Union County’s hub for diverse retail shops, award-winning eating and drinking establishments, local artisans and cultural events.

Since its designation as a Small Town Main Street community in 2009, the town has been actively working to strengthen and revitalize downtown. Since the 2012 Downtown Vision Plan, one of the town’s stated goals for downtown has been infill development. Specifically:

Two recent developments in downtown achieve these goals, creating infill development and effectively enlarging the downtown footprint. Mill on Main, a project of DHD Ventures at 401 E. S. Main Street, will feature 10,000 square feet of commercial space plus 63 apartments. The project is a renovation of the Historic Rodman-Heath Cotton Mill. Millview, a project of Stoneridge Properties, is directly across the street at 318 E. S. Main Street. It features 4,500 square feet of retail space in a brand new building. Curt White, downtown development manager for the Town of Waxhaw, sat down with both developers to learn about why they chose Downtown Waxhaw and to learn about their experience developing here. Both developers believe in Waxhaw and are dedicated to its success. Both groups have a stake in its success because they are local. They live in the area. Waxhaw’s success is their success.

Jason Teller, managing partner of DHD Ventures, believes in Waxhaw. “It was a secret,” he said, “but once people see it, they believe.”

Brian Cillian of DHD Ventures notes that his business wants to “be a part of Waxhaw.” John Maida of Stoneridge says that Downtown Waxhaw is “storybook.” They saw an opportunity to get out in front of the inevitable growth that is coming south from Charlotte. Interest in their projects has been immense.

Not opening until July 1, 2017, the loft apartments at Mill on Main are already 25 percent leased. Millview is already 100 percent full, and John Maida said he had so much interest in the project that he “could have rented three more buildings.” Both developers noted the need for more infill in Downtown Waxhaw. There is demand for housing options and new retail space, both driven by millennials, which according to Brian Cillian are “fueling growth.”