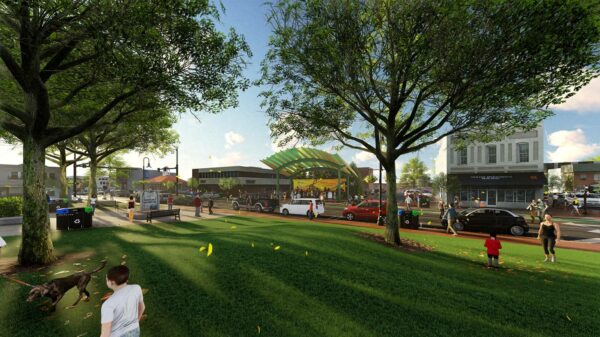 Newton is introducing residents and visitors to the Newton Streetscape Project through a set of cutting-edge interactive renderings that allow you to feel as if you are walking through the city’s soon-to-be-improved streets.

The interactive renderings are a virtual reality representation of what downtown Newton will look like after the city completes an aggressive project to upgrade infrastructure throughout the downtown. The renderings may be viewed from any computer, phone or tablet, and you can hold up your phone or tablet while walking through the downtown area to see a virtual representation of the future streets in front of you.

Streetscape refers to the natural and manmade components that make up a street. The Newton Streetscape Master Plan calls for improved and widened sidewalks, bike lanes, two lanes of parallel parking, and two moving lanes on the streets around the Courthouse Square. The plan also calls for improved open spaces, including a redesigned and expanded Yount Park and the addition of an outdoor stage on the west side of the Courthouse Square to allow outdoor concerts and other events. The majority of the project’s cost will go to much-needed improvements to underground infrastructure and utilities.

“I am excited to see this ambitious project continue to move forward,” Newton Mayor Anne P. Stedman said. “Newton’s beautiful downtown is one of our greatest assets. This project will greatly enhance what you see in Downtown Newton today and help attract investment to our community.”

Newton’s streetscape plan was developed after extensive public input through public meetings, online surveys and one-on-one interviews. The project is currently in its engineering phase, and construction is expected to begin in 2018.

To learn more about the Newton Streetscape Project, visit www.newtonnc.gov/streetscape.