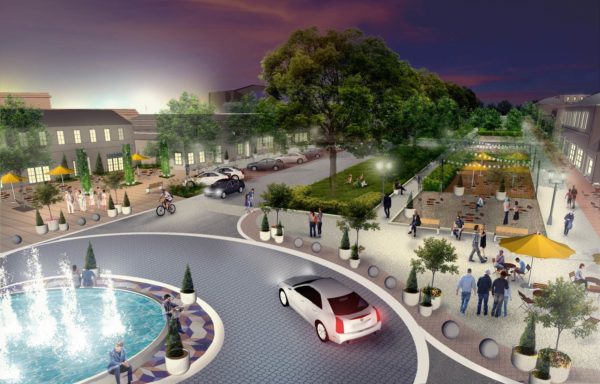 “This streetscape is critical to creating an experience for the people who will live, visit and play in our City."

The City of Kannapolis has released an animation of the West Avenue streetscape, which is the first component of the City’s visionary Downtown Revitalization Project.

The animation can be found at https://www.youtube.com/watch?v=8zPm-i3R_YA. The streetscape is designed to curve and wind through the main core of downtown – West Avenue. It will feature green and outdoor spaces that will complement the new sports and entertainment venue, apartments, retail and restaurants. It will also include improvements to the surrounding streets of downtown.

The most important piece of the streetscape project will be the least visible and the most expensive. It is the infrastructure improvements which include replacing and upsizing aging and undersized underground utilities such as water, sewer, storm water, natural gas, electricity and the installation of technology.

“This streetscape is critical to creating an experience for the people who will live, visit and play in our City. It is an outdoor space designed to serve as our living room and we want everyone to feel welcome and to spend time and ultimately invest in our downtown,” commented Kannapolis City Manager Mike Legg.

The unique design allows the streets to serve as a linear park. The streetscape focuses on green spaces, encouraging pedestrian activity, outdoor dining and social hubs – all while maintaining traffic flow using two traffic circles and offering parking options. The design provides interaction between businesses and preserving historical elements of the City’s core. The project will begin in fall 2017. The City has been planning for almost a decade for these improvements. The project was placed in the City’s Capital Improvement Plan years ago so that the City could set aside monies collected from water, sewer and stormwater fees to pay for a portion of the project. Water, sewer and stormwater fees, as well bonds, will be used to pay for the project which is estimated to cost $22 million.

“We have been working diligently to have a financial plan that would allow us to make this significant investment in our downtown core. Without increases in our fees, our fiscal capacity to sell bonds, and growth in our revenues we would not be able to move forward with this exciting project, said Legg.

The entire Downtown Revitalization Project is expected to bring over $370 million in private investment to Kannapolis once completed.