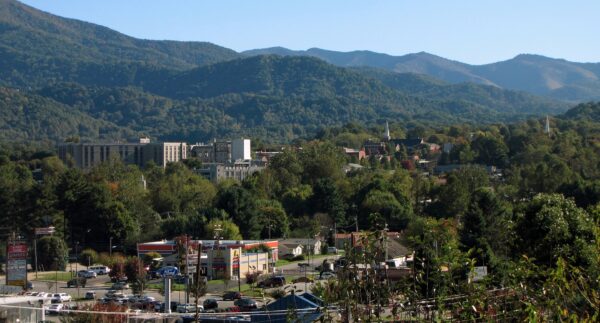 How one mountain town found a way to mix economic development with small-town allure.

Waynesville performs a balancing act common among Western North Carolina towns, but difficult nonetheless. Their task: To attract growth and encourage economic development, while also maintaining the charm of a small, mountain community.

Evidenced by their current state of affairs, Waynesville is walking that line beautifully.

“It’s exciting to be working in a city that’s preparing for future growth in a way that doesn’t compromise what makes a mountain community so special, which, of course, is the mountains,” said Town Manager Rob Hites.

The numbers are impressive. For the first time since the 2008 financial downturn, Waynesville is seeing significant growth in their community, as the population has recently increased above 10,000—a number they had been unable to reach for over a decade. Additionally, development activity has surged, resulting in an array of planned projects: more than 400 apartment units, 42 duplex units, a new hotel, and several office buildings.

In total, the developments represent $77 million in private investment.

Waynesville laid the groundwork for this growth, not through physical development—since conservation of the natural environment remained a top priority—but rather through internal, process-oriented restructuring. They merged the planning and zoning departments in an aim to become as business-friendly as possible. This arrangement allowed those offices to operate under a cohesive strategy and become, essentially, a one-stop shop for business owners.

With the simpler process also came a better relationship between the town and private developer, which, in turn, afforded Waynesville the opportunity to provide expert advice on how, where, and what to build. Through this approach, Waynesville has managed its revival by supporting the economic viability of each project and ensuring that all growth is kept within the typical land restrictions of a mountain community.

“The support we give is not consultancy—it’s attitudinal,” said Hites. “Our mantra is: Let us help you design a development that will succeed both for you economically and for the community.”

Tourism is also increasing, due again in large part to the efforts of local officials. The annual Church Street Arts and Craft Festival and the Apple Harvest Festival each bring in between 20,000 and 30,000 people. Waynesville has, over the course of two decades, perfected the process by which these events set up operations, securing arrangements that include parking, vendor set up, and scheduling. The Town also provides concrete services for the festivals, including police, sanitation, fire and rescue. The efficient operations allow Waynesville to take full advantage of autumn—peak visitors season.

But as the changing leaves continue to draw people to the western part of the state, changing external factors, from economic to demographic, will persist as well. The shifting dynamics can make local leadership a challenging venture. Waynesville, though, gracefully growing through those changes, shows a way forward.