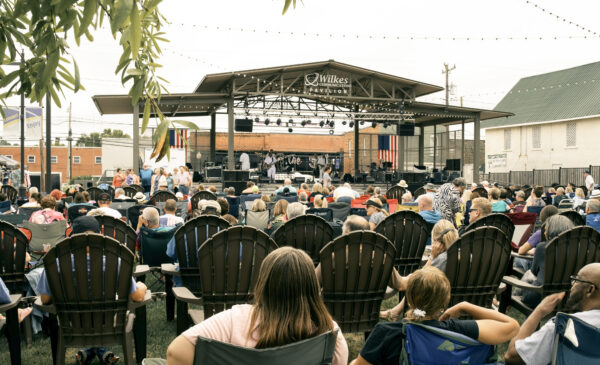 “Special places do not happen by accident.”

A decade ago, Wilkesboro touted the same rich heritage it does today—one of old brick and a mountainous horizon. From every historical and geographical standpoint, nestled in the semi-High Country of western North Carolina, downtown should have been bustling with visitors and residents alike.

But it was not. That character sat idle. Nothing was happening.

“Downtown was neglected,” said Wilkesboro Planning and Community Development Director Andrew Carlton. “There was no investment. After 5 p.m., there weren’t many people out and about and, especially on the weekends, there wasn’t anything to do downtown.”

Town Council and local officials recognized this problem as early as the 1990s. But while the concern was expressed, little was done. It wasn’t until 2009, when part of downtown was designated federally as a Historic District, that the true value of the area came into focus.

“We knew early on that there was interest in doing something downtown…. But nobody formulated a plan,” said Carlton. “That Historic District was a slap on the back that got everybody moving again.”

That first step was a step back and a look around, appreciating what was already present. The next steps were more proactive. Working through a consulting group, Wilkesboro put together and adopted its master plan in 2011. Initially, they went big. The proposal was for an entirely redeveloped downtown—both the business district and Historic District—and laid out Wilkesboro’s vision for an updated city center.

The unavoidable political and financial challenges then arose as expected. Wilkesboro embraced those pressures, allowing them to mold their plan into a palatable project. What began as a full-scale reconstruction was ultimately narrowed down and repackaged into two main phases, each of which needed to surgically address the goal of the initiative.

Put simply, that goal was to get people downtown—not for the immediate impact of increased economic activity on any given night, but rather for two long-term purposes: to increasingly build community and, through the crowds, to highlight the commercial opportunities to investors. It would shine a light on the people of the town as engaged, active participants. That would attract entrepreneurs, who would create additional attractions and opportunity, which would bring more people, then more investors, and so on, in a self-sustaining chain reaction of community revitalization. It was the town’s role to put the sequence into motion.

Nearly 10 years after the Historic District designation and with just one phase complete, the change has been significant. Almost $15 million of public and private capital has been invested downtown, 18 downtown buildings have been improved, and 26 new businesses have opened. The result is activity: outdoor concerts at the new pavilion, festivals, gatherings, and movies in the park. In other words, there are things to do. And for businesses and citizens alike, there’s a reason to be there.

Those public sector investments, which began in earnest in 2016, addressed just three blocks. Phase II would expand that, with a focus on Main Street. But should the project cease today, the progress achieved already may be enough. It’s accomplished its larger goal of carefully organizing a revived and restructured local economy, and there is a long runway for progress ahead.

Most important, there are people downtown again. The hoped-for chain reaction is in motion.

“That’s what we hang out hats on, trying to create a higher quality of life for all demographics and all age groups, to make them feel good about where they live, where they’re moving to, and where they’re raising their kids,” said Carlton. “We’re trying to make sure everybody feels like this is their downtown. This is the heart and soul of their community.”

A recent official report on the project may say it best: “The Town of Wilkesboro recognizes that special places do not happen by accident.”