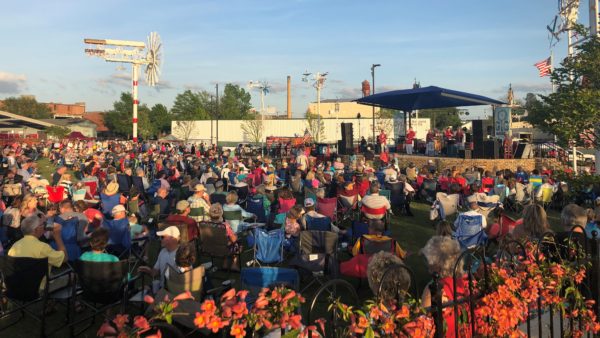 Due to years of strategic planning and investment, Wilson has developed into one of North Carolina’s most exciting towns.

The renaissance currently underway in Wilson is the product of momentum, started by the citizens and sustained by the city—a perfect balance of private and public investment. What’s resulted is a flourishing downtown that lives fully up to its motto: “The Crossroads of Charm and Innovation.”

It began with a park.

“We always say that if you don’t have a natural draw, such as water or mountains, you have to create your own,” said Susan Kellum, Wilson’s downtown marketing and communications coordinator. “That’s what we did with that park.”

The idea was generated and fostered by community leaders, who, through the work of their nonprofit organizations Wilson Downtown Properties and Wilson Downtown Development Corporation, hoped to both honor local artist Vollis Simpson and breathe new life into downtown Wilson. The city played a behind-the-scenes role. Together, they partnered to create Vollis Simpson Whirligig Park, named after and featuring the artist’s large, animated “Whirligig” sculptures that had been a roadside attraction just outside of town for years.

The park garnered statewide and national attention upon its opening in 2017, with the Wall Street Journal calling it, “joyous, jazzy and terpsichorean.”

It was the interim time, however, that proved vital, as the length of the project allowed Wilson the opportunity to promote its plan for downtown resurgence and build a coalition of support behind that vision.

In all, the park project took eight years and $10 million, with most of the funds being raised privately. The city, however, was heavily involved, dedicating staff and organizational resources throughout, assisting fundraising efforts and ultimately investing $1.2 million into the initiative.

To keep the community and local investments at the forefront was a deliberate, long-term approach by the city, and it’s one that is paying strategic dividends now.

All throughout downtown Wilson, the fruits of that labor are evident in the form of numerous developments and restorations: mixed-use development projects, loft projects, a new brewery, a museum for Whirligig Park, new restaurants, both market-rate and affordable housing, renovated commercial spaces, a renovated arts center, a co-working space, and forthcoming projects by both BB&T and the YMCA, among others.

And though the park lit the spark, it was the groundwork Wilson laid for years leading up to that moment that provided the firm foundation on which the city is now blossoming.

Greenlight, the municipally owned and operated high-speed internet gigabit internet service, has allowed the city to focus on attracting an innovation and technology based economy, which they continue to pursue as part of a two-year city development plan titled “Leveraging Gigs and Gigs: Strategic Plans for Wilson’s Metropolitan Innovation.” Wilson’s emphasis on the arts cultivated a creative community, without sacrificing affordability. And the community-engagement initiatives have slowly and steadily built excitement towards the downtown revival.

That’s all in addition to Wilson’s financial investments, grant writing, and allotment of resources—all of which have been necessary to sustain momentum for this revitalization.

“We’ve kept the ball rolling, and once some local folks started to see some things come to fruition, especially the park, they said, ‘Maybe I should get on the train,’” said Van Dyk.