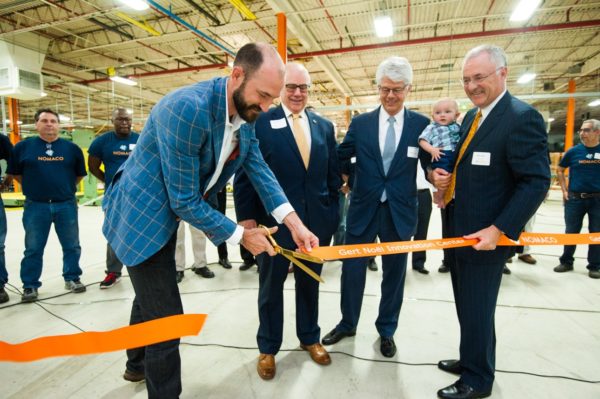 The town's work has led directly to economic growth.

Growing to capacity, one of Zebulon’s longtime corporate residents is expanding in square-footage and personnel with eyes for an innovative future.

In June, more than 130 people involved with or served by the custom engineering foam manufacturing company, Nomaco, gathered to celebrate the opening of its 60,000-square-foot Gert Noël Innovation Center on Zebulon’s East Gannon Avenue, right in time for Nomaco’s 38th anniversary.

“This is an exciting milestone for our company,” said CEO Lars von Kantzow.

On hand to ring in the new facility — which will focus on experimentation, trials and other development — was Zebulon Mayor Bob Matheny.

“Nomaco is already an integral part of the town, but their expansion brings more jobs, brings associated industry that maybe are suppliers to them,” Mayor Matheny said in a video interview with “Talk of the Town” from East Wake Television. He noted that additional industrial growth means more people, rooftops and prosperity in Zebulon, a “win-win all the way through.”

Nomaco extended credit to the Town of Zebulon for being a great growth partner since the company relocated there in 1988.

“The permitting and inspection process for our Innovation Center went very well and the town worked with us throughout each step in the process,” said John Wojcik, vice president of operations at Nomaco. “The Town has partnered with us over the years to find solutions to challenges that we’ve faced, such as traffic flow, and we appreciate that partnership and support.”

Among solutions the town recently announced is a stoplight that will hang at the entrance to the industrial park where Nomaco operates.

Said Wojcik, “Our founder, Marc Noël, often refers to Zebulon’s motto of ‘The Town of Friendly People’ as holding true.”

The company’s new facility is named for Marc Noël’s father, Gert Noël, who started the original family business in Belgium. Initially, 15 people will staff the new Zebulon site, but the growth track calls for about 75 total. All in all, Nomaco employs roughly 175 in Zebulon.